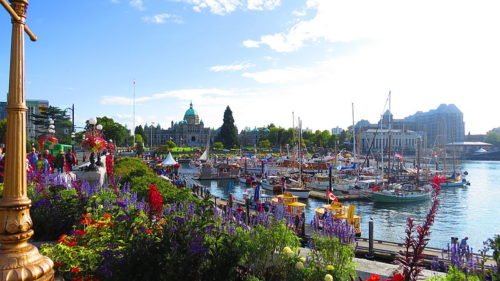 The City of Victoria is writing to 20 of the world’s biggest fossil producers, including ExxonMobil, Chevron, and Shell, asking them to cover the costs the community stands to incur to address the impacts of climate change.

“This letter is a powerful legal and symbolic message to the fossil fuel industry. It sets the stage for other municipalities to take this type of action, to demand a fair share of the costs they are already incurring due to climate change,” said Anjali Appadurai, Climate Law in our Hands Campaigner at West Coast Environmental Law (WCEL).

“Victoria has sent a clear sign that its residents do not want to bear the burden of climate change costs alone—not when the industry continues to operate without paying its fair share.”

Victoria is the third Vancouver Island municipality to send the colossal fossils a climate accountability letter. The city is encouraging local governments across Canada to do the same.

“Organizations such as West Coast Environmental Law have also asked municipalities to consider a lawsuit against oil companies for a portion of local climate costs, similar to those filed recently by California municipalities, including San Francisco and Oakland,” CBC reports.

Well isn’t that just Peachy??
I hope the City of Victoria pays for dumping Sewage into the Ocean??
I am sure Montreal and Vancouver are already lining up to do it, in my Dreams maybe.
They all talk the talk, but fail to walk the talk after all they are Green and self righteous.

Fossil fuel companies are one step (or maybe two steps) removed from the root problem. It is important to remember that they are fuel suppliers. They feed the problem; they do not cause it, in other words.

As you know, the problem is our civilization’s reliance on fossil fuel-burning energy conversion devices (ECDs), primarily and namely:

– the billion or so internal combustion engines in automobiles,
– several thousand coal and gas-fired steam turbines in electricity generation plants, and
– coal and gas-fired production equipment in hundreds of steel mills and cement plants worldwide.

These ECDs are the source of carbon dioxide pollution, of which climate change is a symptom. I own an ECD myself under the hood my 1991 Honda Accord.

Anyway, it would be good idea to also write letters to all the automotive companies, electricity utilities and heavy industries worldwide to ask them to help with climate adaptation and mitigation. The ECDs deployed by these corporate entities in their products and processes are the actual polluters.

Of course, it would also, for example, be a good idea to do everything possible to accelerate roll-out of electric vehicles. And that would go hand in hand with accelerated roll out of charging stations on the part of electric utilities, and/or the rewriting of regulations that would allow 3rd parties to sell electricity. And so on…