UN Climate Fund Operating ‘Like a Car Without a Dashboard’ 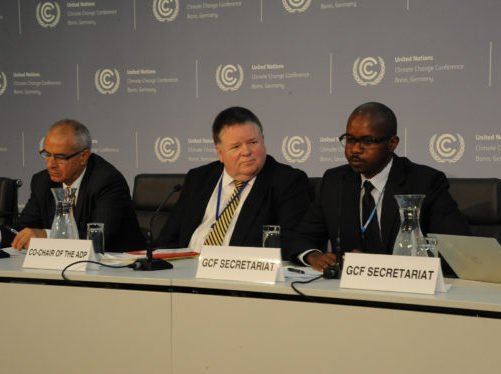 The United Nations Green Climate Fund (GCF) is functioning like a car without a dashboard, with only a tiny fraction of its approved funding actually disbursed and a growing queue of applicants awaiting accreditation to receive funds.

That’s the conclusion that Ian Callaghan of NDCi.Global reaches in a recent blog post, after observing the GCF’s latest board of directors meeting.

The meeting in Cairo approved 11 new proposals, bringing the fund’s total to 54 projects worth US$2.6 billion. “Actual disbursement, however, remains at a fraction of this sum—$88 million for mitigation, adaptation, and private sector projects by the end of September 2017, and a further $10 million for readiness projects, so less than $100 million in all,” Callaghan writes.

“Given that the first projects were agreed two years ago now, the fact that only 3.8% of the funds approved have actually been disbursed is surely an astonishing and disturbing number,” he adds. “Certainly, a commercial operation disbursing at such a rate would have lost all its customers and gone bust long ago.”

Key factors in the GCF’s sluggish performance include the 250 conditions attached to the 43 projects the directors previously approved, and the “escalating backlog” of 92 entities seeking accreditation as GCF recipients—meaning that some applicants might wait five years for approval. “To outsiders, [the accreditation system] seems an impossibly bureaucratic process and one that is very difficult to navigate, and we do know of private sector entities that have significant expertise in developing countries that are not applying for accreditation” or responding to requests for proposals, one private sector observer told the board meeting.

Callaghan proposes an “efficiency dashboard” to monitor the GCF’s projects, with performance indicators that include the number and value of projects approved, funds disbursed, projected time to full disbursal, and tracking of project conditions set, met, and unmet.

In his post, Callaghan welcomes the GCF’s accreditation of five new “direct access entities” (DAEs) as funding conduits for local projects, but notes that five big, international institutions still manage nearly three-quarters of the Fund’s money. “It’s good to see that DAEs are now in the majority, but international entities are still getting all the money,” said one civil society observer. “GCF is at risk of becoming a funding source mainly for large development banks and other multilateral institutions.”

Earlier this year, in a post that followed the GCF’s spring board meeting, Callaghan argued that the Fund was due for a paradigm shift. At that session, a drought adaptation program proposed by Ethiopia became the flashpoint for disagreement between board members from developed countries on one side, developing countries and civil society observers on the other. The project was ultimately turned down.

“The debate cast light not just on this divide, but also on some gaps in the policies and procedures of the Board which—given that this was after all its 16th and not its first or sixth meeting—were disturbingly cavernous,” Callaghan wrote at the time.

“Given that it is a mechanism of the UNFCCC and the product—as one Board member pointed out—of a negotiation among climate experts rather than a strategy or vision of financiers, a politicized structure may have been an inevitability early in its life,” he added. “But seven years on from its formation, this structure is surely now due for some radical reform,” based on established funds that handle several times the $100 billion per year the GCF eventually hopes to administer.

A key structural problem, he said, is a division of responsibilities that gives the GCF secretariat no authority to turn down substandard projects as long as they “tick all the boxes” to meet the administrative requirements for submitting a proposal.

“The result of this is that projects with clear deficiencies come forward, and in almost all cases are approved, but with lengthy conditions attached by the Board in an effort to correct or mitigate the perceived deficiencies,” Callaghan wrote. “Conditions (or covenants) can be a useful tool, but they should be there to promote good behaviour or prevent bad behaviour, not to compensate for basic flaws in project design.”