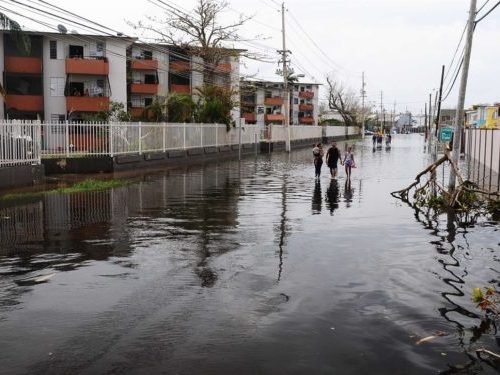 With at least 80% of Puerto Rico’s transmission lines brought down by Hurricane Maria, and a utility company that was bankrupt before the storm hit, a community energy group that formed after Hurricane Sandy is already delivering on-the-ground support to the U.S. territory, while a local advocate sets out terms for the future of the island’s shattered electricity grid.

The common theme that brings the two strands together: While offers by Tesla Inc. and several U.S. solar companies to repower Puerto Rico’s are welcome, and probably well-intended, they have to dovetail with efforts to assert local control over the U.S. local electricity system.

On her Facebook page last week, renowned U.S. climate scientist and advocate Katharine Hayhoe urged her contacts to back ResilientPR, a team that is already delivering community solar generators to the hardest-hit communities in Puerto Rico. “Just imagine trying to live for MONTHS without electricity,” she wrote. “Yes, it would be awesome to see Elon Musk power the entire island with solar,” but “ResilientPR is repowering the island in real time. And they are donation-funded.”

On its website, the U.S. Coastal Marine Resource Center explains that it launched Resilient Power Puerto Rico in the hours after Hurricane Maria hit, based on the successful model it developed in New York’s hard-hit Rockaways district after Hurricane Sandy stormed ashore in 2012.

“Resilient Power Puerto Rico starts with nimble, targeted efforts to deliver solar generators to the most under-served areas of Puerto Rico as a relief measure to get communities powered up and back in contact, with a planned evolution into long-term disaster preparedness and clean energy solutions to impact the entire island,” the site notes.

The first phase in the three-part plan is “to bring as much energy to as many people as possible as quickly as possible, using a proven, mobile solar-electric system that targets the hardest-hit and most remote communities first,” the site states. “In this critical time immediately following the storm’s devastation, the solar hubs will address the basic needs to charge up devices and tools, boost communications, filter water, and connect with neighbours in a space that is bright throughout the day and night.”

Phase 2 will aim to deliver mobile solar-electric kits to Puerto Rico’s 78 municipalities by the end of 2017, setting up “solar hubs” in central plazas or other community gathering points. “Our solar technicians will train local residents during the cooperative installation. This ‘each one, teach one’ style of job training can power up more than the solar kits: it can help develop an island-wide work force capable of growing with the green economy.”

In Phase 3, ResilientPR will work through 2021 to promote solar electricity for every household on the island.

“Rather than perpetuate the island’s dependence on vulnerable distribution hardware and carbon-heavy fuel, we prioritize clean production of energy that allows each household to be self-reliant,” the site declares. “The process of fixing the old electrical infrastructure puts the connections to the residents last; Resilient Power Puerto Rico puts the people first.”

ResilientPR’s plan echoes a local power system specialist’s argument in a recent op ed for The Hill: That Puerto Rico needs a transformed grid to serve the island for the next 50 years.

“Elon Musk’s highly-publicized proposal to engage in Puerto Rico is very welcome and comes at the right time,” writes Ramon Cruz, a member of the U.S. Sierra Club’s National Board of Directors and former commissioner of the Puerto Rico Energy Commission. But “instead of rushing to privatization, the governor should form a multi-stakeholder task force with short-term deadlines that includes experts from the private sector, academia, labour unions, and civil society to analyze proposals and set priorities for transforming the system.”

The extra layer of planning and process is essential, he argues, because of the history and current condition of the Puerto Rico Electric Power Authority (PREPA), the island’s bankrupt electrical utility.

“There is a desperate need to develop a more resilient and cost-effective electric grid for Puerto Rico that relies much less on fossil fuels,” Cruz writes. But “it’s critical to keep a skeptical eye out, because many will come with promises of helping Puerto Rico, while really looking to cash in on a hefty bounty. And while these are not necessarily mutually exclusive actions, Puerto Rico needs to be careful not to forego its future and fall prey to the vultures, simply out of a desire to get back on its feet as fast as possible.”

While solar is “an incredible opportunity” for the island, and it’s essential for communities to commit to 100% renewable energy targets, “it is important to proceed with caution so that these goals are achieved the right way”, ensuring that solar is integrated with affordable energy storage solutions. It also means reducing Puerto Rico’s reliance on an obsolete fossil electricity system, with power plants “so archaic that it takes more than 24 hours to turn them on”.

PREPA itself, Cruz adds, has become “an inefficient monster, with very high prices and poor service due to mismanagement, corruption, and an antiquated business model based on selling electricity instead of services.” The new system “should be built on transparent, flexible, distributed, equitable, resilient, affordable, and efficient solutions including community grids, through which citizens can be more independent of PREPA and be more involved in producing their own power.”

The emerging activity on the ground in Puerto Rico was seemingly light years away from the debate in Washington, DC last week, where Donald Trump threatened to cut off his administration’s already halting aid to the storm-ravaged U.S. territory.

“Electric and all infrastructure was disaster before hurricanes,” he tweeted. “Congress to decide how much to spend. We cannot keep FEMA, the Military & the First Responders, who have been amazing (under the most difficult circumstances) in P.R. forever!”

U.S. politicians on both sides of the aisle pushed back on that declaration, with Reps. Nydia Velazquez (D-NY) and Bennie Thompson (D-MS) asking the Department of Homeland Security to study whether Puerto Rico’s death toll due to Hurricane Maria had been under-reported. House Minority Leader Nancy Pelosi (D-CA) said the Trump tweetstorm was “heartbreaking and it lacks knowledge”. House Speaker Paul Ryan (R-WI) added that “at the moment, and it’s why I’m going down there tomorrow, there’s a humanitarian crisis that needs to be attended to. This is an area where the federal government has a responsibility, and we’re acting on it.”

In the White House damage control effort that followed Trump’s Twitter rant, Chief of Staff John Kelly stated that “the minute you go anywhere as a first responder, and this would apply certainly to the military, you are trying very hard to work yourself out of a job.” But “our country will stand with those American cities in Puerto Rico until the job is done.” (h/t to The Energy Mix reader Fred Huette for pointing us to Ramon Cruz’s opinion piece)

Key Component of Darlington Rebuild Could Run $375 Million Over Budget