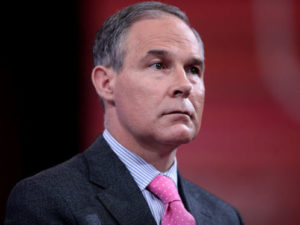 With northern California in flames, 90% of Puerto Rico’s 3.5 million Americans without power, and communities from Florida to Texas still recovering from hurricane winds and torrential flooding, the head of the U.S. Environmental Protection Agency increased their future risks Tuesday by moving to increase his nation’s greenhouse gas emissions.

EPA Administrator Scott Pruitt, who routinely acted as a proxy for fossil interests while Attorney General of Oklahoma, announced his intention to scrap former President Barack Obama’s Clean Power Plan (CPP) while speaking in Kentucky Monday, declaring that “the war on coal is over”. A proposal to repeal the plan was filed with the Federal Register yesterday.

In making announcement, Pruitt repeated the dubious but long-standing fossil industry talking point that the CPP exceeded the federal government’s legal authority (a point still before the U.S. courts). In its repeal proposal, leaked to numerous media in advance of its filing, the EPA claimed that enacting the plan would cost the United States US$33 billion, and disputed its own previous estimates of the economic and health benefits that would come from reducing surface air pollution from coal plant emissions, which are both densely toxic and mildly radioactive.

As Politico explained the 2015 Plan, it “aimed to reduce the power industry’s carbon dioxide pollution levels 32% below 2005 levels by 2030. The rule set goals for each state that were aimed at hastening the country’s shift away from coal-fired power and toward more natural gas, wind, solar, and energy efficiency.”

The plan was the centrepiece of Obama’s program to meet the commitments he made on behalf of the United States in reaching the Paris climate accord that same year. Without it, the U.S. Energy Information Administration calculates, carbon emissions from U.S. electrical generation will rise by 2030, “reversing the current downward trajectory in the United States,” according to The Energy Collective.

The CPP would also have prevented 3,600 premature deaths, 1,700 heart attacks, and 90,000 asthma attacks per year in the United States, the EPA previously estimated.

By moving to abandon it, “Donald Trump and Scott Pruitt will go down in infamy for launching one of the most egregious attacks ever on public health, our climate, and the safety of every community in the United States,” charged Sierra Club Executive Director Michael Brune. “He’s proposing to throw out a plan that would prevent thousands of premature deaths and tens of thousands of childhood asthma attacks every year.”

Concurred Gina McCarthy, the former EPA Administrator who stickhandled the creation of the CPP: “They’re adding more pollution into our air and threatening public health at a time when the threats of climate change are growing, and the costs are growing immeasurably higher on our children and their future.”

For providers of non-fossil alternatives to coal, the announcement came as a not-unexpected “disappointment,” said Matt Stanberry, vice president of Advanced Energy Economy. Stanberry said it would threaten “a $20-billion-a-year market opportunity for our industry, which currently generates $200 billion in U.S. revenue annually and supports more than three million U.S. jobs.”

“The Clean Power Plan rightly treated the electric power system as a system—including power generators, end users, and a range of technologies and systems in between—rather than simply a collection of power plants,” Stanberry said.

Jim Matheson, CEO of the National Rural Electric Cooperative Association, whose members generate 62% of their electricity from coal, welcomed the “flexibility” he said the Plan’s repeal would give them “to meet their individual consumers’ needs”.

National Association of Manufacturers Vice-President Ross Eisenberg said his group “agrees with the EPA’s conclusion that this regulation was broader than what the law allows.” But “at the same time, we recognize the need for a policy to address greenhouse gas emissions.” Eisenberg said his association “supports a greenhouse gas policy going forward that is narrowly tailored and consistent with the Clean Air Act.”

According to the Washington Post, the repeal “does not offer a replacement plan for regulating emissions of carbon dioxide, which the Supreme Court has ruled the EPA is obligated to do. Rather, the agency said it plans to seek public input on how best to cut emissions from natural gas- and coal-fired power plants.”

But whatever future policy the United States now develops to limit the emissions destabilizing the global climate will be developed under a very different yardstick from the one that the Obama administration employed.

In calculating that social cost of carbon, Politico reports, the agency will simply ignore “any social or economic benefits the rule creates outside the United States, and it will count far fewer of the health benefits that might have come from reducing air pollutants that cause premature deaths, heart attacks. and asthma hospitalizations.”

“Taken together,” the Beltway daily adds, “the recalculations eliminate tens of billions of dollars of the rule’s benefits.”

The World Resources Institute’s Noah Kaufman called the newly parochial American view wrong-headed. “Because climate change is a global problem, it requires a global solution,” Kaufman asserted. “If countries try to solve it only for themselves, not taking into account how U.S. emissions affect the global community, you’re just never going to solve the problem.”

While the U.S. administration’s announcement might be seen as contributing to a wilful sacrifice of the country’s coastal cities in order to temporarily preserve about 50,000 jobs in coal mining (a figure Pruitt has inflated in the past), it remains to be seen how quickly or effectively it will influence other actors in the energy sector—notably U.S. states, and utilities driven by market realities rather than ideology or the loyalty due to political funders.

For one thing, notes Politico: It may take “years” for Pruitt’s directive to bear fruit, “as the EPA grinds through the formal process of rescinding the regulation while seeking suggestions from the public on possible replacements.”

And needless to say, “the agency will also face inevitable legal challenges from environmental groups and Democratic-leaning states.”

Meanwhile, the Clean Power Plan’s “targets have become a floor for forward-looking states and companies that acknowledge [it] was a first step towards realizing the promise of a low-carbon power sector,” notes the Energy Collective.

A score of states have set emission reduction targets, the outlet noted, “with most aiming for 80% by 2050 below baselines ranging from 1990 to 2006.” Another 29 states “have binding renewable portfolio standards in place,” and 20 more “have set mandatory energy efficiency targets.”

As well, “the nation’s largest power companies are similarly pledging to slash carbon pollution and deploy renewable energy resources as they embrace the rapid transition to a clean energy economy.”

Voicing a defiance widely shared among climate hawks, The Energy Collective calls the Trump administration’s effort to repeal the CPP only its “latest attack on life-saving safeguards for our children’s health,” but one that “will not change the reality of climate change or the accelerating transition to an economy powered by low-carbon energy.”