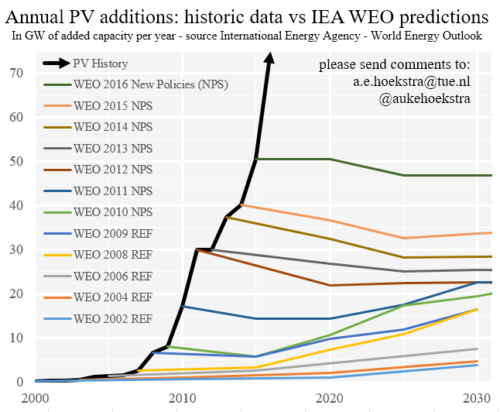 Global renewable electricity capacity will grow 43% through 2022, led by rapid expansion in China and India, after delivering two-thirds of new installed capacity in 2016 and outpacing declining coal and natural gas for the first time, the International Energy Agency calculates in a report released last week.

The estimate represents a “significant upward revision”, Carbon Brief reports, for an agency that has been better known for downplaying its assessments of renewable energy technologies and their growth potential.

IEA Executive Director Fatih Birol pointed to China, in particular, as the catalyst for solar and broader renewable energy growth.

“Along with new policies that spur competition in several other countries, this Chinese dynamic has led to record-low announced prices of solar PV and onshore wind, which are now comparable or even lower than new-built fossil fuel alternatives,” he wrote in the foreword to the report. “This is radically changing the narrative in other emerging economies, which are now looking at renewables as attractive options to sustain their development.”

That recognition comes none too soon, Carbon Brief observes, given the “self-reinforcing nature of bad forecasts from authoritative agencies” like the IEA. Noted Bloomberg New Energy Finance (BNEF) founder Michael Liebreich recently: “When the IEA and [the U.S. Energy Information Administration] say—as they did for many years after I founded New Energy Finance—that modern renewable energy will produce less than 1% of the world’s electricity many decades into the future, that deters serious politicians, investors, or business people from backing them.”

But the latest IEA report tells a different story. Around the world, countries brought 165 gigawatts (GW) of new renewable capacity online last year, Carbon Brief reports, and “a further 920 GW of renewable capacity will be installed by 2022, according to [IEA] forecasts.” New solar capacity grew by 74 GW, nearly a 50% increase over 2015.

By 2022, the IEA predicts, continuing cost reductions and supportive market dynamics will bring solar alone to 740 GW of installed capacity, more than the total installed electricity capacity in India and Japan combined. Renewables will account for 29% of global generation in by that year, compared to 24% today, Reuters notes.

But centre stage in the report went to China, which has increased its solar photovoltaic capacity almost 800-fold in the last decade, from 100 megawatts to 77 GW. The country has already exceeded its 2020 target for PV installations, and is now the “undisputed leader” in several renewables sectors. “Chinese companies now account for 60% of the world’s solar cell manufacturing capacity,” Carbon Brief notes. “This means market and policy developments in China will have global implications on the deployment and prices of solar around the world.”

“In one year, China will install the equivalent of the total history of solar development in Germany,” Dr. Paolo Frankl, one of the lead authors of the report, told journalists.

The IEA found that wind capacity continued to increase in 2016, but its growth rate was down 20% compared to the previous year.

“Hydropower capacity expansion was also lower than in 2015. The Chinese market declined for a third year in a row, although there was strong growth in Brazil. Despite this, hydropower will remain the largest source of renewable electricity generation in 2022 under the IEA’s forecast, followed by wind, solar PV, and bioenergy,” Carbon Brief states. “Coal will remain the largest source of electricity generation, however growth in renewable generation will be twice as large as that of gas and coal combined over the next five years.”

In its report on the IEA release, InsideClimate News put the international results alongside a study from the Natural Resources Defense Council that showed similar renewable energy growth in the United States. “2016, from a U.S. perspective, was a great year for renewable energy and energy efficiency,” said Amanda Levin, a co-author of the NRDC report. “China is still the largest source of new power, but in the U.S., we’re seeing an increase in renewables year over year.”