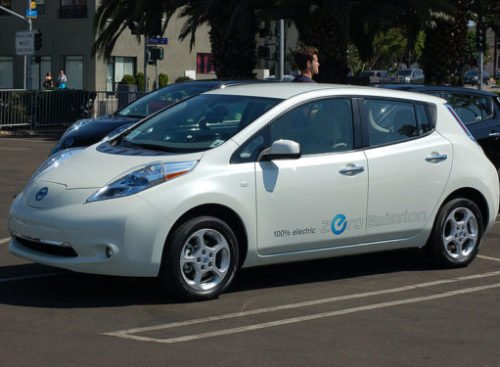 Nissan is planning to offer “vehicle-to-grid” (V2G) services that will essentially enable UK Leaf drivers to power their electric cars for free, by allowing an electricity supply company take charge of their batteries.

The system, which Nissan will introduce next year in partnership with energy supplier Ovo, will pay back the £350 to £400 per year it would cost the average Leaf owner to keep their car powered up.

“After installing a special charger in a customer’s home, the supplier will take over the management of the car’s battery, with owners able to set a minimum amount of charge they want for driving the next day,” The Guardian explains. “Ovo will then automatically trade electricity from the battery, topping it up during off-peak periods when power costs about 4p per kilowatt hour (kWh), and selling it at peak times for about four times as much.”

“Being able to feed back into the grid will mean that customers will be able to drive for free,” said Ovo CEO Stephen Fitzpatrick. While the offer will have a “relatively modest” impact on EV uptake, he still called it “the thin end of a very important wedge”.

Access to the cars’ batteries could “help energy networks cope with the increasing but variable wind and solar power on the system, by returning power to the grid at times of peak demand and smoothing out inconsistencies in energy supply,” The Guardian notes, delivering what Fitzpatrick called a “transformational” impact on grid flexibility.

“As well as avoiding the need for costly grid upgrades, paid for through energy bills, it could reduce the number of new power stations that need to be built,” the paper notes.