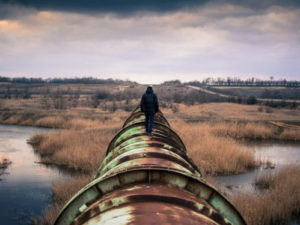 “After careful review of changed circumstances, we will be informing the National Energy Board that we will no longer be proceeding with our Energy East and Eastern Mainline applications,” said CEO Russ Girling. He acknowledged the company would walk away from the $1 billion it had already sunk into the 4,500-kilometre, 1.1-million-barrel-per-day line.

“We appreciate and are thankful for the support of labour, business and manufacturing organizations, industry, our customers, Irving Oil, various governments, and the approximately 200 municipalities who passed resolutions in favour of the projects,” he said in a statement. “Most of all, we thank Canadians across the country who contributed towards the development of these initiatives.”

Natural Resources Minister Jim Carr told reporters TransCanada had based the decision on economic factors. “This was a business decision,” he said. “While we recognize the current market challenges related to lower commodity prices, we are seeing signs of growth in the sector. Our government has approved two major export pipelines that are now under construction, and a third is expected to start soon.”

“Given the positive signals the federal government has sent to TransCanada over the last weeks,” agreed New Brunswick Premier Brian Gallant, “we believe it is clear that TransCanada is not proceeding with its application for the Energy East pipeline because recent changes to world market conditions and the price of oil have negatively impacted the viability of the project.”

“This was an investor decision that resulted from the low global price of oil,” added federal Green Party Leader Elizabeth May. “Look at the number of transnational oil companies exiting the oil sands, selling their assets due to the high costs of extraction and production: StatOil, Conoco-Phillips, Royal Dutch Shell. Fossil fuel investment is becoming less viable while renewable energy investment increases exponentially. Governments need to step up with a plan to assist oil sands workers in transitioning into clean energy jobs.”

With TransCanada still touting a $24-billion capital investment program and working to line up customers for its resurrected Keystone XL pipeline, AltaCorp Capital Inc. analyst Dirk Lever said the Energy East decision was no surprise. “I don’t think really anybody in Calgary thought Energy East was actually going to go ahead,” he told the Globe and Mail. “It was a Plan B.”

With growth of Canada’s tar sands/oil sands slowing, he added, shippers would have been unlikely to commit to both projects. “Several economists have said the Energy East project was also facing an uphill battle due to a slump in Canada’s oilpatch, which is struggling to compete with lower oil prices on the global market due to higher production costs in Alberta’s oilsands,” National Observer notes.

At least two online reports had TransCanada’s stock value rising at least slightly on the announcement.

Alberta Premier Rachel Notley said she was disappointed by the end of what she had previously seen as a “nation-building project” for Canada. “We understand that [the decision] is driven by a broad range of factors that any responsible business must consider,” she said. “Nonetheless, this is an unfortunate outcome for Canadians.”

The Canadian Energy Pipeline Association complained that “a lack of clarity and an unclear decision-making process regarding pipeline projects in Canada are challenging the energy sector’s ability to be competitive in the world market.”

But “as Energy East supporters lamented the loss of jobs and revenue, Indigenous opponents, environmental activists, and a number of Quebec politicians celebrated,” National Observer reports. “Its abandonment, they argued, means fewer climate-polluting greenhouse gas emissions in the air, reduced risk for sensitive land and water ecosystems, and respect for Indigenous sovereignty.”

“It’s a good day for the planet,” said Ghislain Picard, Regional Chief of the Assembly of First Nations of Quebec-Labrador. But “the fight goes on,” he told the Observer. “We can’t certainly let our guard down at this point, because the search for new energies and fossil fuels will continue because the industry is there. We have to remain vigilant, look at what happens around us, and react whenever called on.”

Montreal Mayor Denis Coderre declared “a beautiful victory” against a “botched” pipeline project, adding that the outcome “shows how local governments can make a difference”.

That difference was a crowning achievement for First Nations, cities, and certainly the legions of climate and energy hawks who devoted several years to the campaign against what would have been North America’s biggest pipeline project.

“This is an important day in the fight against climate change in Canada,” said Oil Change International Senior Advisor Adam Scott. “Realizing that Energy East would never be allowed if its full climate impact was accounted for, TransCanada has walked away from the project.”

“Energy East was a disaster waiting to happen,” Scott said. “The pipeline and tanker proposal scheme was utterly incompatible with a world where we avoid the worst impacts of climate change. The project was designed to facilitate massive, long-lived expansion of Canada’s oil production at a time when science shows we must cut carbon pollution rapidly.”

“The world is changing and the end of the age of oil is in sight,” said Montreal-based Greenpeace Canada campaigner Patrick Bonin. “This is an incredible victory for all the people, environmentalists, municipalities, landowners, unions, First Nations, and everyone who opposed this project, causing enough delays and ensuring assessment of the project’s climate impact so that even TransCanada recognized there’s no place for Energy East in a climate-safe world.”

“Many of the facts around Energy East would have remain hidden from the public, were it not for De Souza’s relentless reporting,” Solomon Wood wrote. “This is the power of investigative reporting, to let the public know what is happening behind closed doors, so you, so they, so we, can make decisions that are informed, based on facts and reality.”

Surely it’s the energy doves who are rejoicing – the energy hawks seem all in a dither that their foolishness has been thwarted – I wonder if our efforts in documenting the route had any effect – http://vulnerablewaters.blogspot.ca/ – ?

Thanks, Fred. Interesting point…climate hawks = energy doves. Or, as people in the climate and energy community keep asking — if one group is on an all-out push to drastically change the physical environment and forever alter the very chemistry of the atmosphere, and another group is trying to stop them…who are the conservatives, and who are the radicals??

They could have saved themselves a cool billion if they didn’t lie to themselves and everybody else that EE about providing crude oil to the East. That was bunk and if you didn’t know it before, you know it now.

These guys claim to have defeated the project to save the environment. So instead of eastern Canada using Canadian crude which pays Cdn taxes/royalties and employs Cdns and is shipped through very safe pipelines, we buy hundreds of thousands of barrels from clean producing democratic nations like the Middle East, which crude is all shipped by large tankers. Brilliant environmental strategy!!!!!!

Interesting thought that the Middle East is a nation. You don’t work for the Trump White House by any chance, do you?
On a more important and substantive point — we heard incessantly during the Energy East fight that the pipeline would supply domestic markets, but repetition didn’t make it true. The research I saw (reinforcing the point others are making in the comments) made it very clear that this was an export project through and through. Which was part of the reason communities like Montreal calculated that they would see, if memory serves, either $1 million or $10 million in benefits from pipeline operations, but $1 billion in costs per major spill if those safe pipelines turned out to be not-so-safe. (Check our archive for some of the history of pipeline spills in North America…it isn’t the pretty picture that you seem to be imagining.)

Mitchell pipeline companies have unlimited liability for spills and neither Montreal or any other muni would have to pick up the tab. Enbridge paid the entire cost of Kalamazoo for example. Tell me of one pipeline spill, other than Kalamazoo, that cost a billion anyway!

Well, Kalamazoo, and we’ve never seen a pipeline company try to ship 1.1 million barrels per day when it’s being paid less for its failing product than its original business plan projected. Any business will cut costs when it’s facing financial ruin. Fortunately, most businesses aren’t in the business of shipping diluted bitumen. And unless we want the last month of hurricanes and wildfires to look like a daily walk in the park, we’d better see fewer still in the very near future.
But the bigger issue is that a pipeline spill isn’t just something you buy off with a big cheque. Parts of the Kalamazoo River will never recover from the 2010 spill. There are toxic sites all over North America — look no farther than the fenceline communities in Houston, or the tailings ponds in northern Alberta — where no money can buy the environmental quality, ecosystem services, wildlife diversity, or human health that have been
lost.
And for what? So that a $15.7-billion pipeline can go bankrupt trying to compete against 2¢/kWh solar, brought to the transportation sector by disruptive EV entrepreneurs and plummeting battery costs? TransCanada should be sending pipeline protesters a bunch of thank you notes for forcing it to dodge a bullet. Though I’m thinking no one in the climate community should hold their breath for incoming mail.