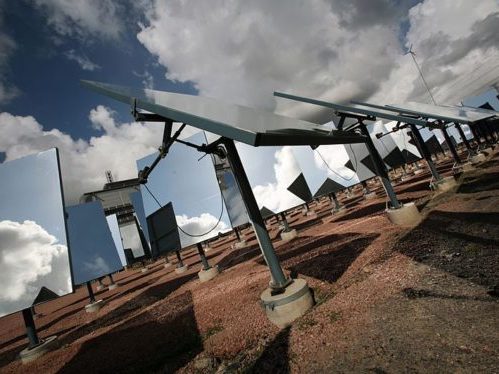 A new design for concentrated solar power (CSP) plants could cut the cost of their heliostats—the mirrors that reflect sunlight onto the facilities’ collection towers—by one-third.

Bay Village, Ohio-based Skysun has come up with a design that connects multiple heliostats to a single motor and support structure, Greentech Media reports. The “ganged” design, supported by Sandia National Laboratories, could cut solar field costs from US$120 to $80 per square metre—closing in on the SunShot Initiative target of $75.

A similar design was first patented in 1978, Greentech notes, and the idea re-emerged in 1999 and 2010. But “while other ganged heliostat concepts have previously been proposed,” the U.S. Department of Energy said in a release, “none of them has shown to be cost-competitive or viable—until now.”

The breakthrough “appears to be the use of tensile support structures that work with single-axis instead of dual-axis actuators. The system is said to maintain industry-standard accuracy in winds of up to 20 miles per hour,” Greentech notes, citing a study by Skysun founder Jim Clair.

Solar fields account for 38% of the cost of a power tower-style plant, so “slashing heliostat costs could be a big deal for CSP developers,” explains Greentech contributing writer Jason Deign. “Cutting that cost by a third would reduce overall installed costs by around 13%. That said, it is unclear how easy it will be for Skysun’s ganged heliostats to achieve commercialization.”