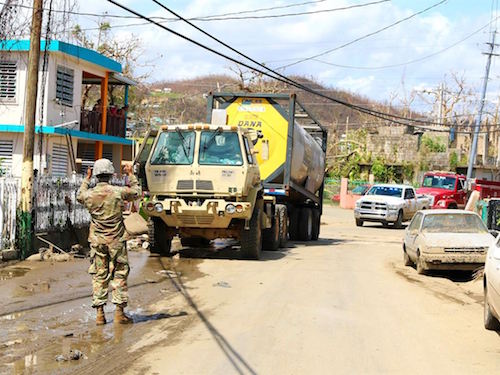 San Juan, Puerto Rico Mayor Carmen Yulín Cruz emerged from a different kind of storm over the weekend to continue her urgent calls for aid and supplies to a city and an island devastated by Hurricanes Irma and Maria.

On Saturday, Cruz faced that most unnatural of disasters, a Donald Trump tweet storm, as the former reality TV star sought to distract attention from his administration’s pathetically indifferent response to the plight of the 3.4 million American citizens, more than 40% of them living in poverty, affected by the twin storms.

“As this disaster played out on U.S. soil, President Trump said nothing,” Fast Company noted late last week. “When he finally tweeted on September 25, it was seemingly to cast blame: ‘Texas & Florida are doing great but Puerto Rico, which was already suffering from broken infrastructure & massive debt, is in deep trouble,’ he tweeted, adding that ‘Much of the Island was destroyed, with billions of dollars owed to Wall Street and the banks which, sadly, must be dealt with.’”

After the Washington Post documented the differences in the U.S. response to Hurricane Irma and the 2010 Haiti earthquake, the military news outlet, Stars and Stripes, picked up the story late last week.

“I think it’s a fair ask why we’re not seeing a similar command and response,” said retired Lt. Gen. P.K. Keen, the three-star general who commanded the U.S. military effort in Haiti, told the Post. “The morning after, the president said we were going to respond in Port-au-Prince…robustly and immediately, and that gave the whole government clarity of purpose.”

Rajiv Shah, the U.S. Agency for International Development official who led the relief side of the Haiti response, agreed: “We were able to move more quickly in a foreign country, and with no warning because it was an earthquake, than a better-equipped agency was able to do in a domestic territory.”

The Post had the numbers. In 2010, “before dawn the next morning, an Army unit was airborne, on its way to seize control of the main airport in Port-au-Prince. Within two days, the Pentagon had 8,000 American troops en route. Within two weeks, 33 U.S. military ships and 22,000 soldiers had arrived. More than 300 military helicopters buzzed overhead, delivering millions of pounds of food and water.”

Eight days after Hurricane Maria hit Puerto Rico, “just 4,400 service members were participating in federal operations to assist the devastated island, an Army general told reporters Thursday. About 40 U.S. military helicopters were aiding in delivering food and water to the 3.4 million residents of the U.S. territory.”

Enter Cruz, a second-term mayor who cast herself as a “pitirre,” a small bird known for fearlessly attacking larger ones, when she launched her first, long-shot bid for office in 2012. “I am asking the president of the United States to make sure somebody is in charge that is up to the task of saving lives,” she told a news conference Friday. “We are dying here. Mayday.”

Puerto Rico Gov. Ricardo A. Rosselló praised the Trump administration response to the crisis, prompting the New York Times to observe that he could hardly do otherwise without jeopardizing incoming aid. In sharp contrast, Cruz declared she had no time for “petty politics” with lives at stake, the Times reported. “Sometimes you have to shake the tree in order to make things happen,” she said. “And if that has a political cost, I will take it, as long as it saves lives.”

Trump’s Twitter response was…entirely in character. He spent the first several days of the crisis obsessing about a crisis he had ignited around protest gestures at NFL football games. Before long, it was time for self-congratulation.

But the tone changed as Cruz’ sharp-edged pleas hit home. “The Mayor of San Juan, who was very complimentary only a few days ago, has now been told by the Democrats that you must be nasty to Trump,” he tweeted Saturday. “We have done a great job with the almost impossible situation in Puerto Rico. Outside of the Fake News or politically motivated ingrates,” he added Sunday.

After that, Cruz avoided direct attacks on the administration as she sought to pivot the conversation back to the aid her city and territory so desperately need.

But the injection of politics and (disordered) personality was frustrating for some of the U.S. legislators following the storm response—including at least one of Trump’s former rivals for the 2016 Republican presidential nomination.

“Every minute we spend in the political realm bickering with one another over who’s doing what, or who’s wrong, or who didn’t do right is a minute of energy and time that we’re not spending trying to get the response right,” Sen. Marco Rubio (R-FL) told Face the Nation on CBS. “I hope we’ll stay 100% focused on what needs to be done to get the people of Puerto Rico help. And then we’ll have plenty of time in the future to have these debates about who didn’t do the right thing or what could have been done better.”

Brock Long, administrator of the Federal Emergency Management Agency (FEMA), said his organization had scrambled to reopen 700 gas stations, about half of Puerto Rico’s “private sector grocery retail”, and phone service for about one-third of the island. He added a shot at Cruz for not participating in relief coordination meetings at a FEMA field office.

“She has been there once,” he told This Week. “This is an operation that needs to happen all of the time.”