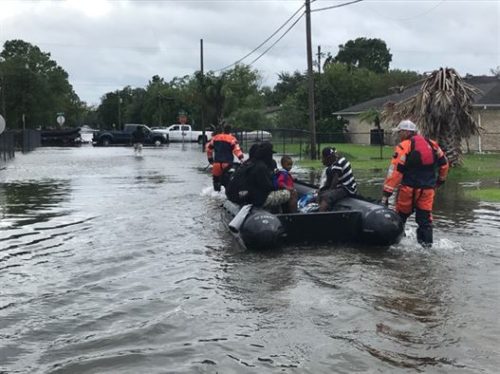 When Hurricane Harvey hit Houston in late August, the flow of evacuees was outbound. Twelve years earlier, when Hurricane Katrina drowned much of New Orleans, many of the people who left arrived in Houston. For film instructor Jennifer Waldo, who lived through both storms, the experience didn’t get any easier with practice.

“One might think that, being a hurricane veteran, I’d be better prepared for dealing with Harvey and its aftermath,” she writes. “Knowing what can happen, though, can be paralyzing. You don’t want to go through it all again. Leaving your life behind. The waiting and the worrying. What if I have to start all over? Again. There’s nothing that can prepare you for recovering from a Katrina or a Harvey or an Irma.”

Waldo traces the experience of scrambling for storm news, weighing whether to trust levees that aren’t supposed to fail, surveying her home to figure out what to save, and deciding when and whether to get out of town.

“I learned from Katrina that you should evacuate as soon as possible,” she writes. “It’s not just the storm and floods you have to contend with, but the crush of people trying to evacuate on the same roads at the same time.”

But in Houston in 2017, the experience was different. The children in her now-blended family were in different parts of town, making it more complicated pack up and leave. And while Facebook was a great source of up-to-date information on evacuation routes and food and gas supplies, online channels turned out to be a mixed blessing.

“Social media can also exacerbate anxiety during a disaster,” she recalls. “In the subsequent days that we spent huddled in my brother’s two-bedroom, one-bath apartment in Austin, we were glued to our phones checking news, river gauges, and posts from people in our neighbourhood who had ignored the mandatory evacuation. A photo of the intersection of State Highway 99 and U.S. Route 90 near our house, with water sitting just a foot or so below the traffic lights, took my breath away, and I felt certain of the devastation to come. What turned out to be false reports of people shooting at the Cajun Navy, or worries about looters, fed into the hysteria.”

And that, in turn, led into a whole other sequence of memories and worries. “We couldn’t stay with my brother indefinitely. Would we end up in a FEMA hotel, like in 2005? What would I do about work? What would the kids do about school? I strained against the uncertainty and worried what kind of city we’d be returning to when we got back to Houston.”

In the end, Waldo and her family were back home in a week, compared to the three months they were out after Katrina. Their house was undamaged, and never lost power. Even the milk in the fridge was still good.

“For much of Houston, though, and for the communities in Hurricane Irma’s path, the hard work and the mental anguish has just begun,” she stresses. “Recovering from events such as these is a kind of grieving process that takes time. All of us, however affected, must grieve the life we thought we were going to live and find ways to accept this new one we’ve encountered. It’s important to find a routine, to get a break from the stress, but often normal can feel a long way away.” (h/t to The Lily for pointing us to this story)