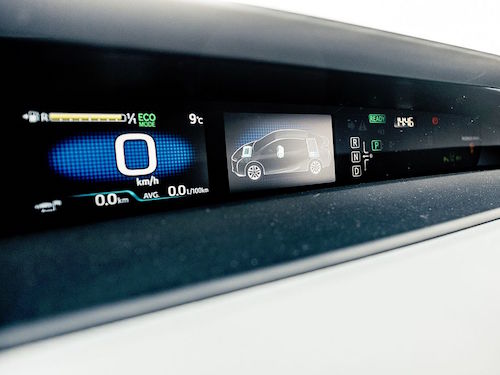 Toyota may have hit it lucky with the rollout of its Prius hybrid—but that doesn’t mean the company is onboard with the shift to electric vehicles, or even fully anticipated the factors that made its earlier innovation such a success.

In a television interview earlier this month, company chair Takeshi Uchiyamada “explained why he didn’t understand the quick transition to electric cars that many of us see on the horizon,” CleanTechnica reports. “While Toyota did get lucky anyway and bust up that big market, it seems the heads of the company are again discounting the latent consumer demand for cars that are better in several ways and that have only a couple of downsides.”

The interview also leaves the impression that Toyota executives “are unaware of the progress electric vehicle tech is making at other companies, or they are just trying to block it out,” writes correspondent Zachary Shahan.

Uchiyamada opens with the range anxiety that is indeed a major decision point for anyone considering an EV. “In order for electric vehicles to cover long distances, they currently need to be loaded with a lot of batteries that take a considerable amount of time to charge,” he told CNBC. But CleanTechnica notes that the comment missed some of the key dynamics in the way EV owners use their vehicles—the overwhelming share of trips that cover short distances, and home charging stations that mostly offset the long waits at public chargers.

“In the USA (where people drive approximately twice as much as Europeans), we drive fewer than 150 miles nearly 100% of the days in a year. Furthermore, nearly 100% of trips are 50 miles or less,” Shahan writes. “Yes, charging may take a while, but if you have a car with 150 miles of range and can charge it at home or work, you almost never have to charge it somewhere else—and, of course, you don’t stand next to the car uselessly while it’s charging.”

Uchiyamada also raised concerns about battery life—even though Tesla is projecting a 10- to 15-year service period for its lithium ion units, and EV batteries can be repurposed for stationary storage after their more mobile days are done. But more to the point, “buyers aren’t thinking 15 years out when deciding which car to buy,” CleanTechnica responds. And “real-world experience indicates that electric cars on the roads today aren’t losing range significantly enough to be a deterrent to customer satisfaction and future sales.

On the whole, the company expects its EV adoption to be driven by government policy, rather than market demand. “As laws and regulations come into effect in places like China and the U.S., car makers will have no choice but to roll out electric vehicles or risk going out of business,” the Toyota chair said. “Toyota is no exception, but we’re skeptical there would be a rapid shift to pure electric vehicles, given questions over user convenience.”

Shahan speculates that might be the sound of an early market leader trying to protect the position of a vehicle model that is about to be replaced. “Being the leader in the ‘hybrid generation’ of electrification, it is not surprising that Toyota would like to hold onto that lead and would like that market to retain its status as the big dog of ‘green vehicles,’” he writes. Talking down plug-in EVs “is one way to delay the forecasted transition in your mind, and it’s also a way to try to discourage electric car sales—consciously or subconsciously.”