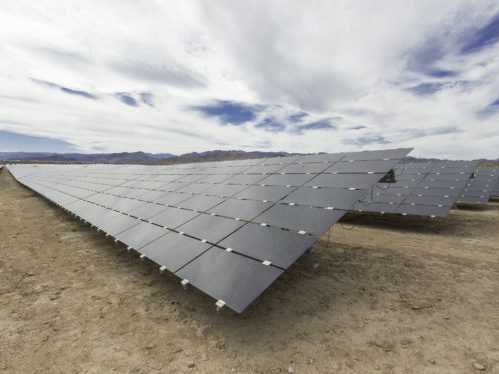 The United States has reached President Barack Obama’s low-cost solar target three years early, bringing photovoltaic-generated electricity in at around US$1 per watt or 6¢ per kilowatt-hour, with senior Trump administration officials taking a victory lap for an achievement they’d previously derided as costly and wasteful.

“With the impressive decline in solar prices, it is time to address additional emerging challenges,” declared Daniel Simmons, acting assistant secretary for the Department of Energy’s Office of Energy Efficiency and Renewable Energy (EERE). “As we look to the future, DOE will focus new solar R&D on [Energy Secretary Rick Perry]’s priorities, which include strengthening the reliability and resilience of the electric grid while integrating solar energy.”

This would be the same Daniel Simmons, EcoWatch notes, who not too long ago warned that solar and wind were “expensive and will increase the price of electricity,” when he worked for the Koch-affiliated Institute for Energy Research. And some of Simmons’ allies outside the administration were still singing that tune.

“I don’t know why they are touting it,” complained Heritage Foundation Vice President Jack Spencer. “I think it should be abolished right away, as should all government subsidies.” [Sure, let’s get right on that! Including these, these, and these? – Ed.)

Bloomberg notes the Trump team is “taking credit for this milestone even though the new administration is skeptical of renewable power,” after proposing to cut EERE funding by 70%. “Surprisingly,” EcoWatch reports, “EERE announced new initiatives instead, and is putting [forward] $82 million in funding for early-stage research toward concentrating solar power and power electronics technologies,” toward a new goal of 3¢/kWh for utility-scale solar by 2030.

The announcement prompted the Washington Post to produce this primer on concentrating solar (h/t to The Energy Mix subscriber Diane Beckett for first pointing us to the story).

In a review of solar’s current pricing and near-term prospects in the U.S., Ars Technica notes that the $1 per watt/6¢ per kWh calculation is based on prices in Kansas City, a community that DOE sees as a “mid-range yardstick” between the more expensive New York City market and more sun-drenched Phoenix, Arizona. “Those prices don’t include an Investment Tax Credit (ITC), which makes solar panels even cheaper,” but they do reflect total installed system costs, including profits on sales of the hardware.