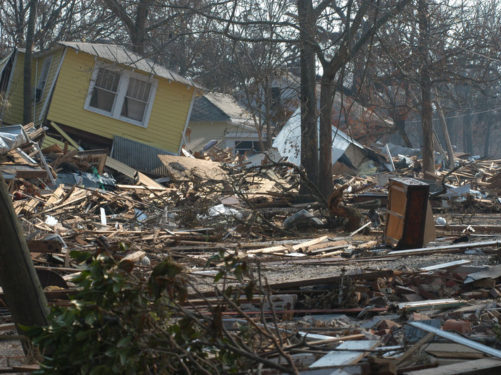 As communities in Texas and Florida begin their recovery from Hurricanes Harvey and Irma, state and federal legislators “should avoid the allure of easy fixes that maintain inequality or policies that make it worse,” Tulane University history professor Andy Horowitz writes in the New York Times.

“Instead, they should use federal and state recovery aid to encourage more equal communities.” And the searing experience from Hurricane Katrina in 2005 is a great template for what not to do.

“When I ask people to tell me their Katrina stories for a book I’m writing about the disaster, their answers are never confined to the day the storm made landfall. Many people barely mention the hurricane at all,” Horowitz notes. “My neighbours tell me about the city before the storm and the difficulty of evacuating. They speak with rage about the shoddy levee system: It was the Army Corps’ failure, not the 2005 hurricane, that flooded the city. They talk about feeling abandoned, left to drown in the world’s most powerful country. They mourn the loss of family members and friends.”

Horowitz chronicles the stress, anguish, and rage that accumulated in New Orleans after the storm had been and gone, concluding that “when historians write about Hurricanes Harvey and Irma, the wind and rain are likely to be a comparatively small part of the story. Instead, what ‘Harvey’ or ‘Irma’ comes to mean will be defined by decisions that lie ahead.”

In New Orleans, that meaning has an unmistakable racial tinge, driven by basic decisions about who got to go home. “Today, while the city’s white population has largely recovered since 2005, approximately 100,000 fewer African-Americans live here than did before Katrina. This stark racial disparity cannot be explained by the flood alone, which discriminated less than many people realize. Rather, political power and policy decisions account for the dramatic change.”

Key questions include how much money people will get to rebuild, whether tenants will qualify, how homeless people will be compensated, and whether recovery work will pay a living wage. In New Orleans, an important detail was that compensation was based on fair market value, not replacement value—a “seemingly race-neutral policy [which] meant that for comparable damage, homeowners in white neighbourhoods were paid more than homeowners in African-American neighbourhoods,” Horowitz writes. “African-American homeowners sued and forced changes in the program, but the resolution did not come until six years after the storm. For many families, it was too late to matter.”

Notwithstanding calls to not “politicize” storms like Katrina, Harvey, or Irma, Horowitz concludes that “rather than closing our eyes to the political decisions that shape our communities, we should open them wide. A disaster without politics would be an event without a history, a catastrophe without a cause.” And ultimately, “the suffering that our collective actions impose upon some people, followed often by the blinding insistence that their vulnerability was somehow fair, or natural, or inevitable, is not the cause or consequence of some external disaster. It is the disaster itself.”