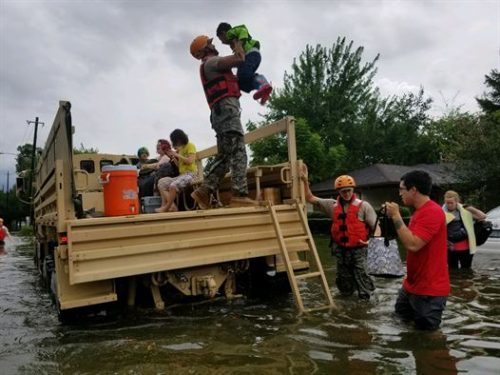 It will never begin to offset the destruction wrought by Hurricanes Harvey, Irma, José, and Katia as they tore their way through the Caribbean and Gulf of Mexico this month, but analysis this week is pointing to the faintest of silver linings in the endless sea of clouds: the mounting pressure on conservative American Republicans to abandon their climate denial.

By mid-week, it was clear that Irma’s course up the west side of Florida, with glancing blows to St. Petersburg and Tampa, would not present the scenes of devastation that emerged after Hurricane Harvey parked over Houston. Nor would it bear comparison to the near-obliteration of several Caribbean island communities, which faced fresh assault from the winds of Hurricane José as The Mix went to virtual press.

The former Category 5 Irma subsided into a tropical storm as it passed Tampa on Monday. Nonetheless, 3.5 million Floridians remained without electric power, and were being warned they might stay that way for weeks. Insurance companies anticipated additional claims from property owners along Florida’s Gulf coast who had failed to prepare as thoroughly as those living along the storm’s earlier predicted track up its Atlantic side.

As families displaced in the largest evacuation in the state’s history began to contemplate when they might return to their abandoned homes, the damage to property from the hurricane and tropical storm winds that swept the entire width of the Florida peninsula remained to be tallied. Combined damage from Harvey and Irma was estimated at US$200 billion to as much as $300 billion.

The other calculus yet to be completed was whether the shocking double strike of two unprecedented storms on United States soil might jolt that country’s political right wing from its ideological refusal to recognize the increasing volatility of the global climate, or the role of fossil fuels in destabilizing it.

As a result, some observers saw a small glimmer of poetic justice when shock radio host Rush Limbaugh, who earlier had implied that Irma was a trumped-up exaggeration meant to boost local retail sales of bottled water and plywood, abandoned his Palm Beach studio and home. But other prominent denialists stood firm.

Pruitt, for one, declared that the landfall of Harvey and Irma, two record-breaking hurricanes, on American soil within 10 days, wasn’t a good time to discuss the contribution of climate change to their ferocity.

Speaking to CNN, Pruitt called it “very insensitive” to discuss “the cause and effect of these storms at this point in time.” His response echoed tactics used by American gun lobbyists, who routinely refused to link that country’s recurrent shooting sprees to “politicized” discussion of the benefits of gun control.

The Republican mayor of evacuated Miami Beach promptly rebuked him.

But many “opponents of action on global warming are either sticking to their guns or avoiding comment,” Inside Climate News reported. Neither of Texas’s two Republican senators responded to the outlet’s questions about the impact of climate change on “the storm that ravaged their state”.

The Washington Post got no further when it sent a similar question to all 38 members of the Texas delegation, ICN noted.

The caucus’ silence may or may not be connected to the $96.7 million the oil and gas industry has lavished on Texas House and Senate candidates since 2011, according to the Center for Responsive Politics.

“You would hope that a tragedy of this magnitude would be a wake-up call for folks who have been staunchly denying climate change,” League of Conservation Voters Vice-President Sara Chieffo told ICN, but “she’s seen no sign of changed hearts or minds among climate science deniers who represent the communities devastated by Harvey.”

“American climate politics have gone from frustrating and weird to … parody? Farce? Reductio ad absurdum?” Roberts lamented. “The increasing strength of the climate case has made no dent whatsoever on the U.S. conservative movement’s denial.”

Television media reports haven’t helped much, charged Peter Dykstra, a former CNN news producer, on Daily Climate. While saluting the major U.S. television networks for their coverage of storms, he noted, “TV news still can’t bring itself to even ask the question” of climate’s role. “You can’t even raise the question of whether climate change may be forcing extreme weather into hyper-drive?” Dykstra challenged his former colleagues. “Really? Not even a question? About something that, in the long run, has the potential to save far more lives?”

Mainstream media often did better, with the Los Angeles Times, for one, succinctly laying out the connections that CNN largely failed to ask about.

ProPublica also collected examples of a squall of fake news that accompanied the events, including the widely-circulated exaggeration that Irma was a non-existent Category Six storm on the five-level Saffir-Simpson scale of hurricane strength.

“What unites misinformation around weather and politics is emotion.” Toronto journalist Jane Lytvynenko told the public interest journalism non-profit in an interview. “If you scroll through fake news headlines, you’ll see that most of them want to inflame a sense of anger or injustice.

“During Harvey, for example, we saw stories about Black Lives Matter blocking emergency crews from entering the city. BLM was actually helping hurricane victims, but the fake news went viral because it inflamed people’s emotions and biases.”

But despite misinformation and the wall of ideological rigidity on the right, the staggering scale of damage from the two hurricanes prompted a rising chorus demanding more realism and less anti-scientific orthodoxy.

“It’s precisely the conversation that we should be having right now,” University of Miami atmospheric scientist Ben Kirtman, who evacuated last Wednesday, replied to Pruitt in the New York Times. “I’m not sure what’s insensitive about that.”

“As we face Irma in the wake of Harvey,” environmental scientist Stephen Mulkey wrote for Medium from his family home, in Irma’s path in Gainesville, “Texas politicians and Trump administration officials have been silent or continue with their insistence that it is inappropriate to talk about climate change as these catastrophes unfold. Wrong. This is exactly the right time to talk about climate change. These servants of the fossil fuel economy echo a well-worn refrain, doubling down on climate denial and the false equivalency that there are two sides to the science.”

“The reality is that the current administration never wants to address either the science, or the public health, or the economics of climate change,” Inslee wrote. “Now is precisely the time for a national commitment, when the winds are blowing and fires are burning. What we’re starting to see is beyond the normal bounds of mere weather changes.”