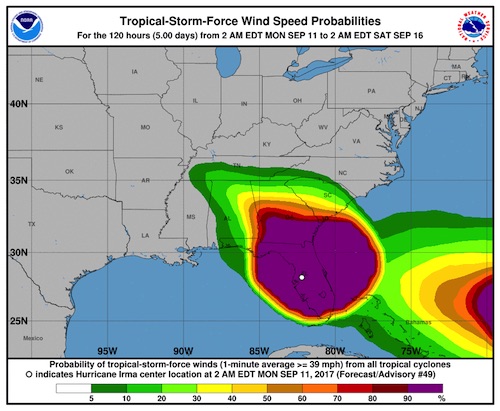 Hurricane Irma hit the Florida Keys Sunday morning as a 640-kilometre-wide Category 4 storm, packing winds of up to 210 kilometres per hour and storm surges in the range of 10 to 15 feet (3.0 to 4.5 metres). By Monday morning, it had brought power outages to 5.78 million homes, about 58% of the state population, taken down construction cranes in Miami and Fort Lauderdale, left all of downtown Miami underwater, and spun off at least two tornadoes, before diminishing to a 75-kilometre-per-hour Category 1 hurricane, on a course to hit heavily-populated Tampa-St. Petersburg with six-foot storm surges earlier this morning.

Echoing equally practical instructions from his counterpart and political confrere in Texas, climate-denying Governor Rick Scott asked viewers on Fox News Sunday to “pray, pray for everybody in Florida”.

Miami’s Republican Mayor Tomás Regalado had a more realistic response, even if it meant going against Trump administration officials like Scott Pruitt who prefer not to focus on the “cause and effect” link between severe storms climate change. “This is the time to talk about climate change. This is the time that the president and the EPA and whoever makes decisions needs to talk about climate change,” Regalado told the Miami Herald, speaking from the city’s downtown Emergency Operations Center. “If this isn’t climate change, I don’t know what is. This is truly, truly a poster child for what is to come.”

In Naples, Florida, CBC reports, water levels rose more than two metres in 90 minutes. The Florida Panhandle and southern Georgia will face up 15 inches of rain as the storm tracks northwest. State officials were reporting 573 shelters in 64 of Florida’s 67 counties, holding 155,000 people.

At different points in its path through the Caribbean and now Florida, Irma has been powerful enough to “change the shape of the ocean,” the Washington Post reports, by pulling water away from the shoreline. “I am in disbelief right now,” tweeted @Kaydi_K Saturday afternoon. “This is Long Island, Bahamas and the ocean water is missing!!!” “#Tampa bay now an effective dog park as we wait for @irma,” tweeted @scheuster just after noon Sunday. “With @CityofTampa parks closed ahead of storm, this is the best we’ve got.”

“MOVE AWAY FROM THE WATER,” the U.S. National Hurricane Center shouted back over Twitter. Post Deputy Weather Editor Angela Fritz explained the phenomenon, writing that “in the centre of the storm, where the pressure is lowest and the winds are converging, water piles up. Low pressure is basically a sucking mechanism in the sense that it draws the air inward. When the pressure is exceptionally low and the winds are very strong, it can create a bulge of ocean water under the centre of the storm.”

The Tampa Bay region hasn’t seen a major hurricane up close since 1921, and the area population has since grown from near zero to four million, with a “highly developed coastline,” the Washington Post reports. “We are about to get punched in the face by this storm,” Mayor Bob Buckhorn tweeted yesterday. Later, he added, “I think our day has come.”

The Post describes the Tampa region as “flat and flood-prone, and by some estimates it is the nation’s most vulnerable area in the event of a hurricane strike. Pinellas County, home to St. Petersburg, is a peninsula off the Florida peninsula and the most densely populated county in the state, with nearly one million people surrounded by water. Hillsborough County, home to Tampa, has billions of dollars of development in a watery downtown and artificial islands.”

With the safe window to evacuate long past, city officials were sending out advice on how to shelter in place. “We’ve asked people to get to know their neighbours, if you don’t already,” said Tampa Fire Rescue spokesperson Jason Penny, whose agency was sending rescue support to Beaumont, Texas just last week. “We’re trying to put out a message of community; we’re all in this together. We could use help from about anyone right now.”

Despite all the impacts Florida has actually seen, Hurricane Irma could have been far worse for the state if it hadn’t been weakened by its passage over Cuba, Associated Press reports. “There’s a huge difference between a (Category) 3 and 5 when it makes landfall,” said WeatherBell Analytics meteorologist Ryan Maue. “This is obviously not the worst-case scenario for Florida overall.”

The storm “briefly trekked over Cuba’s low-populated coast Friday evening through Saturday afternoon,” AP reports, citing Weather Underground Meteorology Director Jeff Masters. “That weakened Irma enough that when upper-level winds from the west eroded some of the storm’s top and also blew in dry air, it had the combined of effect of making Irma more ragged.” At that point, “Irma’s southwest eyewall sort of came apart, no longer a perfect circle on satellite imagery.”

Then “competing weather systems” pulled Irma to the west, creating fear and frustration for people on the west coast who had thought the worst of the storm would miss them. But that drew some of the winds and water away from a direct hit on Miami and an overall path with US$1.5 trillion in property at risk, as opposed to $1 trillion to the west, according to insurance modelling firm AIR Worldwide, which estimates $15 to $50 billion in insured losses from Irma.

While Florida can thank Cuba for its inadvertent role in weakening the storm, the island nation has more deliberately sent more than 750 health workers to help Antigua, Barbuda, Saint Kitts, Nevis, Saint Lucia, the Bahamas, Dominica, and Haiti deal with the after-effects of Irma, the Independent reports. “The Central Medical Cooperation Unit, together with the Minsap Management Center, and our embassies, have maintained the communication to assess the damages and assess what help our own collaborators could provide,” Regla Angulo Pardo, the director of Cuba’s Central Unit of Medial Cooperation, told Granma.

Billionaire entrepreneur and British Virgin Islands resident Richard Branson, meanwhile, called for a “disaster recovery Marshall Plan” for the Caribbean, comparable to the multi-billion-dollar U.S. program to rebuild Europe after the Second World War. With tens of thousands homeless and “worrying reports of civil unrest spreading,” he wrote, “we must get more help to the islands to rebuild homes and infrastructure and restore power, clean water, and food supplies.”

Branson urged the UK government to take on a “massive role” in the region’s short-term recovery and long-term infrastructure reconstruction.

“Over the coming weeks, we’ll have to assess exactly what is needed,” Branson wrote. “It is clear to me creating jobs is paramount—there will be a huge amount of rebuilding to be done, and people will need work to help rebuild their lives as well as their homes.” The effort to revitalize local economies will also “have to include building resilience against what is likely to be a higher intensity and frequency of extreme weather events,” he added, “as the effects of climate change continue to grow.”

Irma Hits Florida: Evacuation Orders Mean Little If You Can’t Get Out