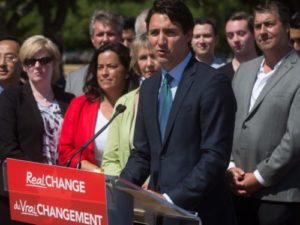 Prime Minister Justin Trudeau’s two-year effort to square climate and environmental protection with fossil and pipeline development has left him taking fire from all sides, CBC reported last week, with climate hawks and fossil executives expressing their disappointment with the government’s performance.

“What the heck does it take for us to recognize that we have entered…a period in time when humans have become the dominant factor shaping the world we live in?” asked environmental icon David Suzuki, who joined with Stewart Phillip, Grand Chief of the Union of British Columbia Indian Chiefs, and Green Party Leader Elizabeth May to charge that the Trudeau Liberals aren’t delivering on the environmental values they claim.

“Economy has become the most important issue, more important than the very air that allows us to live,” he added, pointing to Hurricane Irma and the B.C. wildfires as evidence of a mounting climate crisis.

The oil and gas industry, meanwhile, see the PM as anything but a pipeline champion. “Trudeau is walking a fine line between different interest groups and frustrating both, and not making anybody really happy,” said Petroleum Services Association of Canada CEO Mark Salkeld. But “the oil and gas industry is not going anywhere any time soon.” Even in 2040, “we won’t be burning it like we burn it today, but we will still be using it as feedstock for the petrochemical industry for thousands and thousands of products.”

The National Energy Board’s blockbuster decision last month to include downstream greenhouse gas emissions in its consideration of TransCanada Corporation’s Energy East pipeline put the government in fossils’ crosshairs again late last week, after the company requested a 30-day delay in the Board’s hearings on the project.

Alberta, New Brunswick, and the Conservative Opposition in Ottawa lined up to defend the pipeline, with Conservative MP Michelle Rempel claiming the government had dropped the federal regulatory process “into quicksand”. National Post columnist John Ivison accused Trudeau of sacrificing Energy East rather than jeopardizing votes in Quebec.

“The fact that the axe is hanging over the NEB clearly had an impact on the decision” to apply GHG analysis to the Energy East project, when it wasn’t a factor for Kinder Morgan’s Trans Mountain pipeline expansion from Alberta to British Columbia, Ivison wrote. “The government is currently mulling proposals produced by an expert panel that recommended the NEB be scrapped and replaced by two new bodies.” So “in an apparent attempt to ingratiate itself with a government looking for a good reason to kill Energy East, the board raised the regulatory bar to a level that TransCanada does not seem prepared to even attempt to vault.”

“The decision to re-scope so profoundly is, fundamentally, a mistake by the panel—one implicitly endorsed by the Trudeau government,” ex-fossil executive Dennis McConaghy told Ivison. “If the government couldn’t abide more pipelines or LNG projects, it should have said so explicitly and not deferred the job to the NEB.”