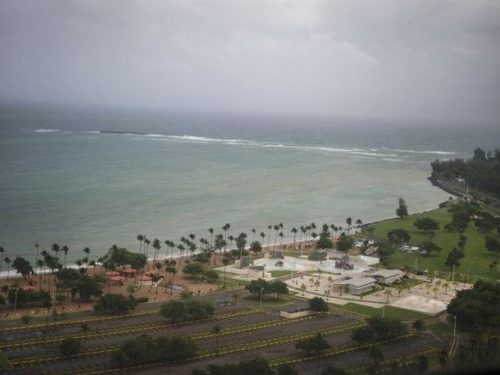 Seismologists picked up signs of the passing storm on equipment designed to measure earthquakes, sustained winds of 280 kilometres miles per hour made it the strongest Atlantic hurricane in history, and large swaths of territory were devastated as Hurricane Irma surged through the Caribbean on a path to South Florida.

“Hurricane Irma rapidly strengthened over warmer than normal ocean waters on Tuesday into a Category 5 storm with estimated wind speeds of 185 mph—the strongest ever measured in the Atlantic Ocean,” meteorologist and veteran climate hawk Eric Holthaus reports on Grist. “On Wednesday, Irma made landfall in a number of northern Caribbean islands at peak strength, including Barbuda, Anguilla, St. Martin, St. Barthelemy, and several of the British Virgin Islands. Its landfall tied a 1935 Florida hurricane for the strongest on record anywhere in the Atlantic basin, and the second-strongest ever measured anywhere on Earth.”

Holthaus explains that, “quite simply, meteorologists never expected a storm like Irma. The storm appears to have exceeded the maximum theoretical strength for a hurricane in its environment—an estimate based on current water temperature and other conditions.” That left hurricane experts pondering on social media “whether or not it should be considered a Category 6—which it would qualify for if the traditional five-tiered Saffir-Simpson scale were extrapolated for wind speeds as strong as Irma’s.”

In its standard description of Category 5 hurricane damage, the U.S. National Hurricane Center states: “A high percentage of framed homes will be destroyed, with total roof failure and wall collapse. Fallen trees and power poles will isolate residential areas. Power outages will last for weeks to possibly months. Most of the area will be uninhabitable for weeks or months.”

Prime Minister Gaston Browne of Antigua and Barbuda said 95% of the islands’ properties had been damaged, and the $100-million repair bill would be far beyond his country’s means. “These storms are more ferocious, they are coming in greater frequency—evidence that climate change is real,” he told CNN. “We’re living the consequences of climate change.”

On CBC, Browne said he was “barely holding on, trying to preside over a difficult situation,” after Irma levelled much of the country. “What’s left of Barbuda, a popular tourism destination known for its sun and sand, is barely recognizable,” reports the network’s public affairs show, As It Happens. “Nearly every building on Barbuda was damaged when the hurricane’s core crossed almost directly over the island early Wednesday. About 60% of its roughly 1,400 residents were left homeless.”

While Antigua was left largely unscathed by the storm, on Barbuda “it was total carnage,” Browne said. “They would have endured winds of up to 230 miles per hour, and that in itself created an unprecedented amount of damage in Barbuda, to the extent that 90% of the properties there were actually damaged, many of them demolished.”

With schools, the airport, the seaport, telecommunications, and utility infrastructure all sustaining severe damage, “it looked like a landfill, and that’s no exaggeration.”

On St. Thomas in the U.S. Virgin Islands, homes were damaged, and the island’s “once-dense vegetation was largely gone,” CBC reports. “There are no leaves. It’s crazy. One of the things we loved about St. Thomas is that it was so green. And it’s gone,” said resident Laura Strickling. “It will take years for this community to get back on its feet.”

More than half of Puerto Rico was without power, with some news reports anticipating a three- to six-month wait before utility services are restored. The state emergency management agency was reporting 900,000 people in the dark, nearly 50,000 without water, and 14 hospitals operating on emergency generators.

Forecasters were looking ahead to Hurricane José, a Category 3 hurricane tracking through the mid-Atlantic and expected to hit Anguilla, Antigua, and Barbuda, and Hurricane Katia, a Category 1 storm over the Gulf of Mexico expected to intensify as it moves southwest. Thousands of people were petitioning the World Meteorological Association to rename Hurricane Irma to Hurricane Ivanka, and @IanAlda on Twitter had revived old calls for all hurricanes to be named for climate change deniers.

Meanwhile “Irma, which is already the strongest hurricane ever recorded outside the Caribbean and the Gulf of Mexico, is likely to make landfall somewhere in Florida over the weekend,” The Independent reports. “Florida, Puerto Rico, and the U.S. Virgin Islands have declared states of emergency,” with Florida Gov. Rick Scott—whose administration has famously prohibited references to climate change or global warming in state publications—saying the storm could affect “millions of Floridians”.

Severe weather specialists said Irma is big and powerful enough to deliver dangerous weather up to 200 miles from the eyewall, the most hazardous part of a hurricane. “The hurricane force winds in Irma are wider than Florida,” tweeted Weather Channel hurricane specialist Bryan Norcross. “You won’t need a direct hit to get Wilma-type winds & storm surge on both coasts.”

And Holthaus notes that Florida “has transformed since the most recent Category 5 hurricane, Andrew, hit in 1992,” in ways that could make parts of the state more vulnerable. “Miami alone has added 600,000 new residents in that time, and the state’s storm-buffering wetlands have degraded amid a push for urbanization. In the past 25 years, one in 10 new homes in America were built in Florida, during a slow spell for hurricane landfalls. That lucky streak now appears to be coming to an end.”

But the severity and intensity didn’t stop the U.S. conspiracy community from adding farce to tragedy, with syndicated shock radio host Rush Limbaugh declaring Irma a hoax and provocateur Alex Jones saying the storm was geoengineered.

“These storms, once they actually hit, are never as strong as they’re reported,” Limbaugh said. “There is a symbiotic relationship between retailers and local media, and it’s related to money,” he claimed.

Incredibly, Limbaugh encouraged listeners in the hurricane’s path to ignore government officials urging them to evacuate.

“Do not listen to @rushlimbaugh when he says #Irma is not a dangerous #storm and is hype,” celebrity meteorologist Al Roker tweeted in response. “He is putting people’s lives at risk.”

Jones claimed the government is using a “weather weapon” to raise fears about climate change, and found it too convenient that Irma had hit just a month before the October premier of Geostorm, a science fiction film about weather control.

“I’m not saying Irma is geoengineered,” he said. But “isn’t that just perfect timing?”

The Washington Post responded to the two rants yesterday with a solid analysis of how conspiracies take hold and turn toward unreasoned skepticism on climate change, severe storms, and meteorology.

As media coverage shifted to the areas hit by Irma, the U.S. Senate overwhelmingly passed an initial emergency aid package for communities hit by Hurricane Harvey, and local attention turned to the daunting clean-up ahead for South Texas. The New York Times reported from Houston on the estimated eight million cubic yards (6.1 million cubic metres) of debris waiting to be picked up for disposal, noting that local officials “are asking residents to separate their Harvey-related waste into five piles: appliances; electronics; construction and demolition debris; household hazardous waste; and vegetative debris. A look at these streets suggested that few people seemed to be heeding the city’s pleas.”

Meanwhile, several attorneys interviewed by the Thomson Reuters Foundation said Harvey could be the catalyst for a new form of post-disaster litigation, based on the duty to anticipate and address the impacts of climate-related disasters.

“As extreme weather events and related damages and other impacts increase in severity,” said risk management attorney Lindene Patton, of the Washington, DC-based Earth & Water Group, “courts will increasingly be called upon to seek redress for damages suffered.” With at least a couple of scientific teams preparing to study the extent to which Harvey can be linked to climate change, “attribution science can inform that legal process”.