Towns Flood, Chemical Plants Release Toxics as Harvey Comes Back for a Second Round 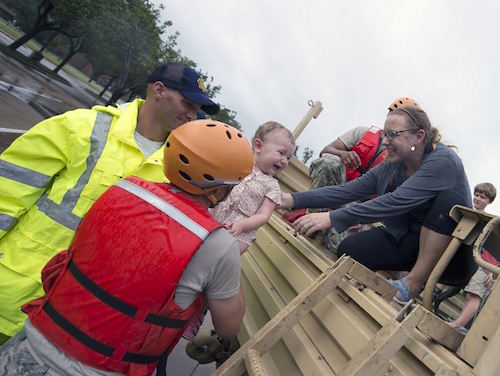 Tropical Storm Harvey made a second landfall Wednesday near the Texas-Louisiana border, dropping more than two feet of rain on towns like Beaumont, Port Arthur, and Orange that led to severe flooding, urgent evacuations, and explosions at at least one petrochemical plant in the area.

Much of Port Arthur, population 55,000, was underwater, with water in an estimated one-third of the city’s buildings and one emergency shelter flooded, the Washington Post reported. In Houston, meanwhile, 39 people were reported dead, 35,000 were in shelters, and untold thousands of homes were still underwater. Gov. Greg Abbott (R), whose guiding solution to the crisis seemed to be to declare a day of prayer, said 210,000 Texans had requested assistance from the Federal Emergency Management Agency (FEMA).

That number is expected to rise, with FEMA Administrator Brock Long telling a news briefing it will be “many, many years” before the full impact of the storm becomes clear. “We expect a many-year recovery in Texas, and the federal government is in this for the long haul,” added Acting Homeland Security Secretary Elaine Duke.

Coming from the state whose Congressional delegation sought to block federal funds for communities hit by Hurricane Katrina 12 years ago, Abbott said he expected federal aid to Texas “‘should be far in excess’ of the roughly US$120 billion in funds allotted for Gulf Coast recovery” at the time, the Post stated.

Floodwaters in Houston had begun to recede Wednesday, after maxing out at 1,260 square miles (3,263 square kilometres)—70% of the city, an area larger than Rhode Island—covered in at least 1.5 feet of water. In nearby communities, the nightmare was just beginning, the Post recounted. In Beaumont, failing infrastructure left 118,000 people without drinking water, and “for most of them, there was no easy way out of a town that now felt like more of an island: The city was surrounded by swollen rivers and bayous, cutting off most roads.”

Meanwhile, the U.S. National Hurricane Center was warning that another tropical storm could form in the Gulf of Mexico next week. “If this system does develop, it could bring additional rainfall to portions of the Texas and Louisiana coasts,” the NHC reported yesterday.

In Crosby, TX, everyone within a 1.5-mile radius of the Arkema chemical plant was evacuated after reports of “intermittent smoke” coming from the facility. Arkema “manufactures organic peroxides, a family of compounds used in such products as pharmaceuticals and construction materials,” the Post explained. “Those chemicals must be kept cold, or they will combust. They are not cold anymore. The storm left the plant submerged in six feet of water, and its cooling systems and backup systems failed.”

On Thursday, the plant reported two explosions followed by fires that sent numerous sheriff’s deputies to hospital. Authorities later described the explosions as “small pops”, with Arkema executive Richard Rennard saying it was impossible to know for sure what was happening with no employees left on the site.

“These things can burn very quickly and violently; it would not be unusual for them to explode,” he told media. But “we believe it hasn’t been a massive explosion; it’s just been these vapour release valves that popped” in one of nine, 36,000-pound (16,330-kilogram) box vans storing organic peroxides at the facility.

“We fully expect that the eight other containers will do the same thing,” he said. “We anticipate that all of this product is going to degrade; we don’t know exactly how long that’s going to take…it’s impossible to predict.”

A past Environmental Protection Agency study identified organic peroxides as skin and eye irritants that can also cause liver damage, the Post noted. While Long initially said a release from the plant would be “incredibly dangerous”, Harris County Sheriff Ed Gonzalez later told reporters the fumes created by the chemical reaction were “not anything toxic; it is not anything that we feel is a danger to the community at all.”

The reporting on chemical hazards got much more detailed and substantive on Grist, where New Republic climate specialist Emily Atkin pointed to the 25 chemical plants that have either shut down or had production disrupted due to the storm. “Those closures are not only disrupting markets,” Atkin wrote. “They’re also causing enormous releases of toxic pollutants that pose a threat to human health.”

All told, Atkin writes, “industrial plants reported 74 excess air pollution release events to TCEQ, or nearly 60% more than the previous week. Those releases have so far totalled more than one million pounds of emissions above legal limits, according to Air Alliance Houston, an environmental non-profit that crunched the numbers.”

While general media were inundated with news of evacuations, strandings, and the occasional chemical plant explosion, fossil industry publications focused mainly on disruptions to business as usual. On Rigzone, Reuters reported that Harvey had shut down 4.2 million barrels per day of refinery capacity, nearly equal to Japan’s daily consumption, including the country’s biggest refinery, the 600,000-barrel-per-day Motiva plant in Port Arthur. About 25% of the country’s gasoline production was curtailed, driving up gas futures prices by 16%., and “major pipelines carrying gasoline and diesel fuel to Midwest and East Coast markets have been either throttled back or shut due to reduced supply.”

“The continued increase in flooding creates high uncertainty on the amount of damage that U.S. refineries will incur, the pace at which the shutdown will reverse, and the magnitude of capacity that will be impaired over the next few months,” Goldman Sachs analysts wrote.

In another Rigzone post, Bloomberg reported that prolonged shutdowns could put the West Texas shale boom at risk, leaving production from the oil fields with nowhere to go.

“With a number of refineries in the region closed by the storm, pipelines have fewer places to deliver oil carried from prolific West Texas shale basins,” Bloomberg noted. “When pipelines close, the refineries still open have less oil to process. Ultimately, producers may find their oil stranded with their route to the coast limited.”