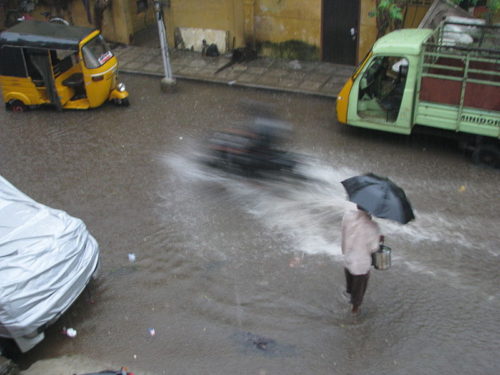 Indian Prime Minister Narendra Modi blamed the “big negative impact” of climate change and new weather patterns as he described relief efforts on an “extensive scale” to help millions of people hit by record monsoon flooding in his country.

“Mother Nature gives us life and nurtures us, but at times natural catastrophes such as floods and earthquakes wreak havoc on a massive scale,” Modi said. “Climate change, altered weather cycles, and transformations in the environment are also having a big negative impact.”

Thomson Reuters reports at least 130 dead and millions affected by floods that have “submerged villages, washed away crops, destroyed roads, and disrupted power and phone lines.” The heavy rains “have caused mighty rivers like the Brahmaputra river and their tributaries to burst their banks, forcing people into relief camps in states such as Gujarat, Assam, Rajasthan, and West Bengal.”

Across India, Bangladesh, and Nepal, more than 1,200 people have been reported dead. In an update Thursday on Canadian support for relief efforts, CBC put the number of people directly affected across the region at 40 million. “The flooding continued to devastate on Thursday, when a building collapsed in Mumbai, partly because the foundations were weakened by some of the heaviest rainfall seen in that city in 15 years,” the national broadcaster reports. “The accident killed at least 16 people and injured 30 more.”

Thomson Reuters notes that monsoon rains between June and September are essential to an agriculture sector that provides nearly half of India’s employment and represents 18% of its gross domestic product.

“But in many states across the country, the rains frequently cause rivers to overflow and flooding forces millions into temporary camps, devastates standing crops, destroys homes, and exposes people to diseases such as diarrhea,” writes award-winning correspondent Nita Bhalla. This year’s rains have been 4% above average since they began in June, according to the India Meteorological Department.

That activity has “not only triggered landslides in hilly regions like Nagaland, Manipur, and Arunachal Pradesh, they have also flooded national parks, forcing wildlife, including the rare one-horned rhinoceros, to flee,” Bhalla reports.

“Life goes completely topsy-turvy as a result of the floods. Crops, livestock, infrastructure, roads, electricity, communication links—everything gets affected,” Modi said last Sunday, during his monthly radio broadcast. “In particular, our farmer brethren have to bear a lot of losses because of the damage to their crops and fields.”

CBC reports that, with a population of 1.6 million, the South Asian community is Canada’s largest visible minority group and accounts for more than 7% of the population in Ontario. “Everybody is together on this — they aren’t thinking twice,” India Canada Association President Umesh Kumar said of the relief effort. “They lost their bikes, homes, clothes, medicine—everything. Everybody needs some kind of help, and they are counting on us.”

Time to Lead with Compassion When Connecting Harvey with Climate Change