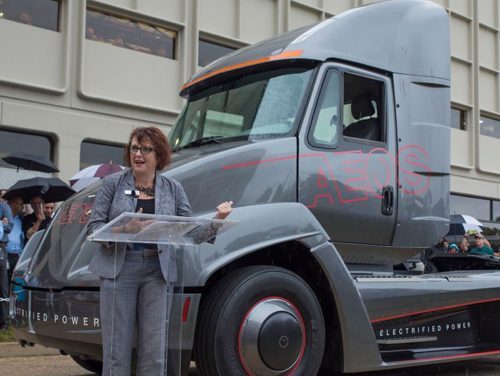 Commercial truck-maker Cummins has unveiled a heavy-duty cab with an advanced, 140-kilowatt-hour battery pack that it plans to begin offering to commercial freight and bus operators in 2019.

The Class 7 tractor, designed to haul a 22-ton trailer 100 miles on a single charge, is intended for urban deliveries, as well as short hauls around ports and other freight terminals, Forbes reports. The battery can recharge in about an hour at a customized charging station, and Cummins is working to get that time down to 20 minutes by 2020.

“An extended range version, which uses an efficient diesel engine as an onboard generator, will be available a year later, offering up to 300 miles between charges and 50% fuel savings compared to today’s diesel hybrids with zero emissions,” the business magazine notes. But “an electric powertrain does not yet make sense for a Class 8 semi tractor-trailer, also known as an 18-wheeler, because of the larger loads they carry and the longer distances they travel.”

Forbes notes that Cummins scooped Tesla’s expected reveal of an electric “semi” truck by several weeks. “By getting a jump on Tesla’s announcement, Cummins is getting across loud and clear that it intends to remain a major player in the commercial truck business, even if that market shifts away from its core diesel engine business.”

Cummins CEO Thomas Linebarger said the company has been working on electrified power trains and fuel cells for about a decade, and takes the competition seriously “There are more technologies coming into economic relevance than we’ve seen in my career, ever,” he told Forbes. “This is what we do. We feel we do better when technologies are shifting.” (h/t to The Energy Mix subscriber Diane Beckett for pointing us to this story)