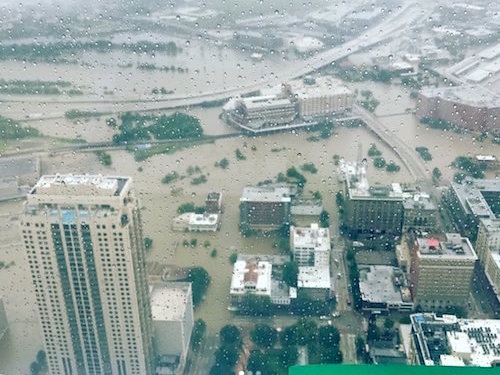 Hurricane Harvey has dumped nearly three feet of rain on southeast Texas and 20 to 30 inches across the Houston metropolitan area, the United States’ fourth-largest city and third-largest county, with emergency managers declaring the storm the worst the state has ever seen and no respite expected for at least a couple of days.

At least five people were reported dead so far, with an estimated 30,000 forced into emergency shelters.

“Catastrophic flooding in the Houston metropolitan area is expected to worsen,” the U.S. National Weather Service stated Sunday, describing an area that is just barely above sea level. “This event is unprecedented and all impacts are unknown and beyond anything experienced.”

“I know for a fact this is the worst flood Houston has ever experienced,” Weather Service meteorologist Patrick Blood told the Houston Chronicle.

“This will be a devastating disaster, probably the worst disaster the state’s seen,” said Federal Emergency Management Agency Administrator Brock Long. “The recovery to this event is going to last many years to be able to help Texas and the people impacted by this event achieve a new normal.”

The rains hit one of the United States’ major oil refining and transportation hubs at a moment when the country’s flood preparedness programs are severely underfunded, and climate deniers in Congress—including at least one House committee chair from the general area affected by the storm—are determined as ever not to connect cause and effect.

The storm caused “massive flooding that knocked out 11.2% of U.S. refining capacity, a quarter of oil production from the U.S. Gulf of Mexico, and closed ports all along the Texas coast,” Reuters reports. “Gasoline futures jumped as much as 7% to their highest level in more than two years in early Monday trading,” a trend that is expected to continue as the outages limit gasoline supplies.

The majority of Houston’s rivers and bayous were at record levels, some of them exceeding past record by 10 feet, the Washington Post reports, citing the Weather Service.

“A relentless band of heavy rain sat nearly stationary over Houston and its surrounding suburbs Saturday night. By Sunday morning, the effects of hour after hour of drenching rainfall started to take their toll, with widespread reports of high water on roadways,” the paper notes.

Before long, emergency service organizations and personnel were far beyond capacity.

“Professional first responders could not handle all of the thousands of calls from people endangered by rising waters. The roads were largely impassable. Residents reported calling 911 and getting no answer. The Red Cross command centre in Houston became physically isolated amid floodwaters,” the papers notes in a story last updated Sunday evening.

“So people had to take matters into their own hands. They connected on social media, asking for or offering help. They launched private boats and kayaks. They carried people to higher ground.”

Rainfall in Harris County exceeded the volume from Tropical Storm Allison, the region’s previous worst flood on record, in half the time, the Post states. On Sunday evening, the NWS Weather Protection Center was “calling for an additional 15 to 25 inches of rain over the middle and upper Texas coast, including the Houston area, during the next several days. The National Hurricane Center said isolated storm rainfall totals could reach 50 inches, which would rival some of the most extreme rain events in U.S. history and break the state rainfall record in Texas.”

And then, “perhaps even more frightening, computer model forecasts are showing the very real possibility that Harvey will move back over the Gulf of Mexico Monday night and Tuesday, when it could restrengthen modestly. It may make a second landfall near Houston on Wednesday, with rain continuing into Thursday and even Friday.”

On the New Republic site, climate reporter Emily Atkin picks up on an aspect of the story that mostly hasn’t hit daily media—the potentially devastating environmental and health impact of a major flood striking the centre of the U.S. petrochemical industry.

“If a storm rips through the region, it will hit an area that includes roughly one-third of the country’s known oil and natural gas reserves,” she writes, citing a 2016 New York Times op ed enumerating the risks to expect “when the next hurricane hits Texas”.

ProPublica and the Texas Tribune are also out with analysis and animated mapping that sums up the region’s hurricane and flood history.

Atkin describes the region’s petroleum refining and its ethylene, specialty chemical, and aviation fuel production, noting that oil and chemical companies were already shutting down facilities ahead of “potential flooding” at Houston-area sites.

“Environmental advocates are also worried that Harvey will create long-term public health problems due to accidental toxic substance releases, and not just from refineries and power plants,” Atkin notes. “In the 30 counties where a disaster has been declared, there are dozens of Superfund sites, many of which are essentially waste pits containing harmful chemicals. The San Jacinto River Waste Pits, for example, contain carcinogenic dioxins, which are linked to birth defects. Advocates also rightly point out that communities living closest to all these sites—both the Superfunds and the refineries—are disproportionately low-income and minority.”

A Grist exposé before the storm showed how Houston’s efforts at urban revitalization have left those fenceline communities behind.

Several news reports are pointing out that this is the first major hurricane to make landfall in the U.S. in more than a decade. And it comes less than two weeks after Donald Trump issued an executive order rolling back federal efforts to plan for the local impacts of climate change and sea level rise, under the guise of trying to streamline approvals for badly-needed infrastructure.

The order revoked “an earlier executive order by former President Barack Obama that required recipients of federal funds to strongly consider risk management standards when building in flood zones, including measures such as elevating structures from the reach of rising water,” the Post reported at the time. “Obama’s Federal Flood Risk Management Standard, established in 2015, sought to mitigate the risk of flood damage charged to taxpayers when property owners file costly claims.”

“What makes all this so confounding is that Trump clearly recognizes the threat of sea level rise,” New Republic’s Atkin noted at the time. “Last year, he applied for a permit to build a sea wall to prevent erosion at his oceanfront golf resort in Ireland. Trump later withdrew that permit—because of opposition from locals, not because the threat disappeared.”

The Trump administration is also proposing major budget cuts to FEMA, Fast Company reports. Although the Brock Long, the agency’s new administrator, is receiving positive media commentary for his past emergency management experience, he’s on record supporting the budget reductions.

“While recognizing that Mr. Long is an experienced emergency management professional, Senator Booker could not vote in favour of a nominee who supports a reckless budget that undermines the capabilities of the very agency he was asked to lead,” said Thomas Pietrykoski, press secretary to Sen. Cory Booker (D-NJ), one of four U.S. senators who voted against Long’s confirmation.

People trying to rebuild after Harvey will also find out that the U.S. National Flood Insurance Program (NFIP) is itself in dire straits. “A series of disasters has left the NFIP struggling financially,” Mother Jones warns. “Hurricane Katrina and Superstorm Sandy devastated the flood insurance program’s budget, and today, the program is about $24 billion in debt.”

NFIP has also received persistent criticism for encouraging homeowners to rebuild and stay in frequent flood zones. “There’s no incentive to leave because taxpayer subsidies rebuild homes and buildings, even if those structures have repeatedly flooded,” Mother Jones notes. But Trump’s FEMA budget cut takes $190 million out of an effort to update the flood maps, many of them out of date, that would have helped the agency track the risk more effectively.

Although Trump is expected to visit the region Tuesday, he is so far live-tweeting his response. “The upbeat response from the commander in chief, punctuated by exclamation points, prompted questions about whether he was prematurely declaring the storm response a success, even while many still faced the prospect of deadly danger,” the Post reports.