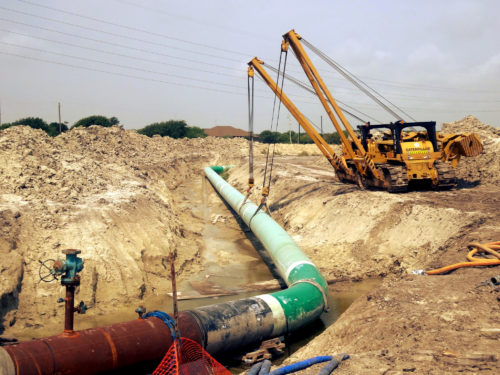 In a decision hailed as a victory for climate and energy campaigners and a setback for TransCanada Corporation, the National Energy Board (NEB) has announced it will consider upstream and downstream greenhouse gas emissions in its upcoming review of the controversial Energy East pipeline.

“I think if the NEB does what they say they’re going to do with any measure of rigour, this project is dead,” Équiterre Senior Director Steven Guilbeault told National Observer.

But despite a decision Guilbeault described as “another nail in the coffin” for the 4,500-kilometre, 1.1-million-barrel-per-day pipeline, Équiterre “is still calling on the government to freeze its evaluation of the project altogether, until it finalizes the NEB overhaul using recommendations from the panel it appointed,” the Observer notes.

“We are happy with what the new panel has done over the past few months,” Guilbeault said, “but it’s still operating under the rules that were established by the Harper government and that’s a problem for us. I think it’s a problem for a lot of people.”

Environmental Defence agreed that, “by moving forward with the review of the largest, longest pipeline ever proposed in North America using a broken and discredited pipeline regulator, the federal government is inviting the controversy and gridlock it faces right now with Kinder Morgan.” Still, the Toronto-based organization stated, “apparently you can teach an old dog new tricks,” with the NEB agreeing to look into the estimated 30 to 32 megatonnes of upstream and 265 megatonnes of downstream emissions that Energy East would enable each year.

TransCanada declined comment until it had a chance to assess the NEB letter. “We are going to take the necessary time to review the issues list and understand the potential impacts on the project,” said spokesperson Tim Duboyce. But the Canadian Association of Petroleum Producers showed no such reticence, contending that “the ruling allows needless duplication of existing federal environmental protections and will create more delays for builders who will have to submit more information,” Canadian Press reports.

“It’s the signal about the length and complexity of the regulatory process that is becoming concerning here,” said Nick Schultz, vice-president of pipeline regulation. “It is not like any pipeline company can control the emissions on either side of their pipe.” [Editor’s note: Well, no, they can’t. Isn’t that kind of the point?]

Ecojustice lawyer Charles Hatt said the focus on upstream and downstream emissions has been a long time coming. “This decision culminates years of work by countless individuals and groups that have fought against blinkered, siloed regulatory reviews that only pass the buck on climate change,” he told the Observer’s Elizabeth McSheffrey. “The Board’s decision is both lawful and sensible. Surely it is now self-evident that a pipeline review must consider all potential greenhouse gas emissions and the risk that the pipeline will become a stranded asset in tomorrow’s economy.”