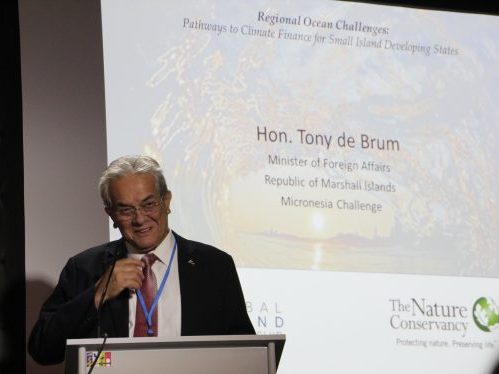 The global climate community marked a sad moment last night at the news that Marshall Islands lead negotiator Tony De Brum, described as a “hero” of the Paris agreement, is dead at age 72.

ClimateHome carried a compelling chronology of De Brum’s life that describes him first as an anti-nuclear campaigner who witnessed the devastating U.S. nuclear weapons test at Bikini Atoll in 1954. At that moment, De Brum and his grandfather were on a fishing boat 200 miles away. De Brum became one of the first Marshall Islanders to graduate from university, led his country’s negotiations “to receive fair reparations for the annihilation and poisoning of their land”, and “was a key figure in achieving the full independence of his country in 1986”, writes CH Editor Karl Mathieson—all before turning his attention to the climate crisis and the Paris agreement.

“The very existence of the Paris Climate agreement owes a lot to Tony De Brum,” Marshall Islands President Hilda Heine wrote in a statement. “He was a giant of history, a legend in every meaning of the word and a custodian of our shared future.”

“Tony De Brum. Such a good friend, such an inspiring leader, such a pillar of determination,” tweeted former UN climate secretary Christiana Figueres. “Such a loss. We must fulfill your vision.”

“RIP Tony De Brum,” added Greenpeace Aus Pac. “You have always been, and will always be, a torchbearer for us all.”

De Brum treated climate change and sea level rise as “the key issues of his time as a Marshall Islands foreign minister,” the BBC recalls. “In the Paris climate negotiations, his warm, personal and relaxed style was very much in contrast to the stiffer, greyer faces of some teams. He used his charm to build strong personal relationships with many of the political leaders from rich and poor countries alike.”

He was a key architect of the “high ambition coalition” of nearly 100 nations that emerged during the Paris conference and played a key role in pushing the landmark global deal to completion.

“The biggest win from Mr. De Brum’s perspective,” BBC adds, “was that the Paris agreement committed to the goal of keeping global temperature increases close to 1.5°C,” in keeping with one his favourite phrases—”1.5 to stay alive.”