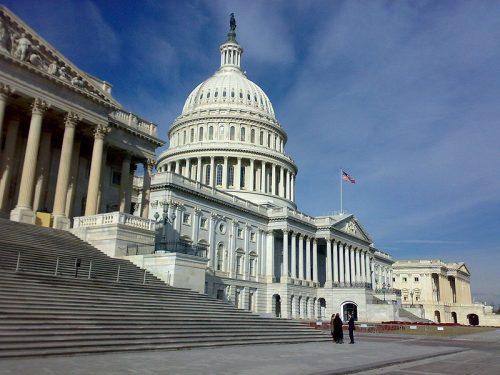 If the White House and congressional Republicans can get themselves organized around a long-awaited overhaul of the U.S. tax code, two Democratic senators are pointing to the long-shot possibility that the process could point the way to a US$49-per-tonne tax on greenhouse gas emissions.

Sens. Sheldon Whitehouse (D-RI) and Brian Schatz (D-HI) “insist the tax reform is a way to create bipartisan support,” and have drawn backing from climate hawks as well as a “cadre” of conservative supporters, the New York Times reports. “The senators propose to use a portion of the estimated $2.1 trillion they anticipate in carbon tax revenue over the first 10 years to reduce the top marginal corporate tax income rate, something the White House has called for.”

The two legislators hope to draw support from White House economic advisor Gary Cohn, who discussed a similar plan in February with a group of prominent Republicans.

“There are only a handful of options in terms of generating revenue for broad-based tax reform, and they’re all very close to dead on arrival,” Schatz said. “This is the one proposal that could attract a significant number of Democrats.”

“There are Republicans willing to work with us, and not just a few,” Whitehouse added. “They just need the prospect of safe passage through the political kill zone.”

“What is that Taylor Swift song? We are never, ever, ever getting back together? This is never, ever, ever going to happen,” said anti-tax crusader Grover Norquist, yet the idea keeps re-emerging. “This time there is money for promoting that this idea might happen someday,” he acknowledged.

“It’s so much revenue that it’s always going to be on the table and it’s always a threat,” said Koch Industries alum, fossil hawk, and Trump transition advisor Thomas Pyle, president of the Institute for Energy Research.

The other question is whether the White House and its legislative allies will be able to push tax reform through Congress, succeeding with an intricate and complex policy measure that has tripped up far more competent and functional administrations. “We are going to hit the ground running, literally this month on tax reform,” Cohn said last Tuesday at a Trump Tower news conference, just minutes after his boss had roiled the next several days of political coverage with his insistence that “both sides” were responsible for the previous weekend’s white supremacist violence at Charlottesville, VA.

States Embrace Social Cost of Carbon as Trump Rejects It