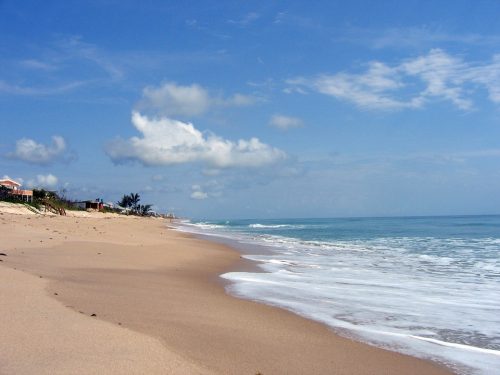 The sea is coming for coastal human settlement, and it seems to be rising at a particularly brisk pace for Florida and the rest of the U.S. southeast Atlantic coastline.

And for “at least 26 million people around the world,” CNBC News reports, that reality is at hand. That’s the number of people the Worldwatch Institute estimates have already been dislocated by rising oceans. “And that figure could balloon to 150 million by 2050.”

According to new analysis by the American Statistical Association, the global ocean didn’t rise significantly between AD 1 and shortly after the onset of industrial-scale fossil fuel combustion. By 1800, sea levels were beginning to creep up. Recently, that creep has been speeding up into something more like a stroll; on a global average, the oceans are rising about three to 3.5 millimetres each year, or more than three centimetres per decade.

“If rates continue to rise at their current pace, or even faster, that can signal major problems for coastal cities in the future,” Scientific American warns, citing Andrew Parnell of University College Dublin, the lead investigator on the study along with colleagues in the United States and Singapore.

But the future is coming faster for some “hot spots” than others, the article notes, citing a separate study published in the journal Geophysical Research Letters. Sea levels along America’s southern Atlantic shoreline from Cape Hatteras, NC to Miami “rose dramatically between 2011 and 2015,” that study found. In addition to the global effects of thermal expansion of seawater and melting ice sheets, the timing of shorter-term natural cycles like El Niño and an oscillation in air pressure over the North Atlantic have helped push waves inland six times faster than average over hundreds of kilometres of U.S. coastline.

Tides and storm surges can compound even an apparently small additional depth of seawater many times over when wind and currents focus it all on one section of coastline. “I think the projections give you a false sense of security because you say, ‘OK, we’re not going to get to this level until the year 2060, or whatever’,” Dutton said. “But in reality, it can happen much faster.”

Next-Gen Nuclear Reactors ‘Not Remotely Ready’ After 18 Years, US$2 Billion