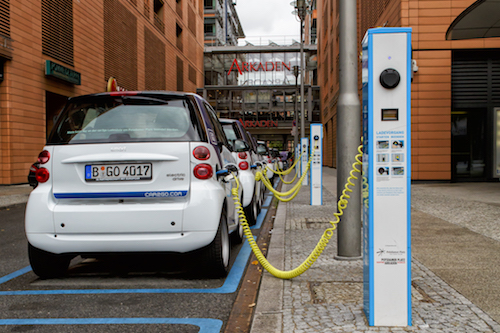 A new generation of electric cars being built in Europe will be able to make money for their owners while they appear to be doing nothing, EcoWatch reports. The secret: they’ll be acting as a virtual peaking power station for the European grid.

Nissan and Mitsubishi are among the automakers developing so-called Vehicle-to-Grid (V2G) models that come pre-loaded with the ability not only to charge their batteries from the grid, but also to discharge them at least partially to send power back to utilities to cover transitory demand peaks.

According to EcoWatch, the carmakers are cooperating with European grid integration specialists Enel, Nuvve, and Insero in a Danish demonstration project dubbed, appropriately enough, the Parker Project. Owners of V2G-ready vehicles “earn money just by parking the car at two-way charge stations,” the news outlet explains.

“You can compare it to Airbnb where you have an asset, in this case not an apartment or a room, but a car, and you want to make the most out of that asset by letting someone else use it, as well, when you are not using it,” said project manager Peter Bach Andersen. “Maybe you use your car 5% of the time. But the rest of the time, when it is just standing there and you are not using it, you can allow the power system to benefit from this car, and you get compensation for doing so.” Fleet owners, EcoWatch reports, “are earning up to US$1,530 annually at these charge points” for each vehicle they own.

The anticipated large-scale switch from fossil fuel to electric drives for automobiles, Bach said, “will lead to a higher demand [for] power and energy in the power system. The immediate effect is a challenge to the power system, but if done intelligently, these electric vehicles can actually be used as an asset to ensure an economic power system based on renewable energy.”

The idea isn’t new. Last year, GTM Research estimated that electric vehicles not in use could add five gigawatts of rapid-response storage capacity to the United States power grid. A related 18-month market test by California utility PG&E and German automaker BMW found that San Francisco-area electric car drivers could be paid to adjust their charging times in ways that reduced the demand the utility had to meet.

The prospect of renting a parked EV’s battery to the local utility adds an additional benefit to what some observers have already identified as a “killer” feature of the electric car: untethering from gas stations with the ability to refuel while parked overnight at home. Now, those hours plugged in could actually put money in EV owners’ pockets.