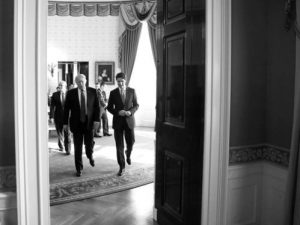 Negotiators from Canada, Mexico, and the United States meet for the first time in Washington, DC, today to begin discussing how to modernize—or whether to scrap—the North American Free Trade Agreement. The opening round of talks may reveal more about how Foreign Affairs Minister Chrystia Freeland intends to square a renewed NAFTA with Canada’s climate commitments.

Freeland took several opportunities over the weekend to signal her intention to use the trade talks to strengthen both labour and environmental protections in any reformed NAFTA. “In three separate public appearances on the same day—one at the University of Ottawa and two on Parliament Hill—she sought to reinforce a message that environmental protections are a clear focus,” the National Observer reports.

Canada would “fully support efforts to target climate change,” in the negotiations, Freeland told the House of Commons environment committee. But she was coy about what that commitment would actually mean in trade negotiations with a U.S. administration which denies that climate change is occurring or, if it is, that it demands a response.

NDP international trade critic Tracey Ramsey urged Freeland to make an explicit inclusion of the phrase ‘climate change’ in a new NAFTA text a deal-breaker for Canada. ““Trying to remove or erase climate change from this agreement will be a red flag to all Canadians,” Ramsey told reporters after Freeland’s committee testimony. “It’s very important to Canadians that the environment and protections are included in trade agreements.”

The Conservative Official Opposition used the moment to attack the Liberal government’s proposed floor price for carbon emissions, set to take effect next year. “Any product trying to be exported into the U.S., it’s going to have a carbon tax price added onto it,” Conservative trade critic Gerry Ritz complained, pointing to the disadvantage that would place on Canadian export sales to the United States. “Then coming in from the U.S., is it going to have to measure up to that level, as well, in order to come through?”

While Ritz scoffed at the idea of enshrining the right to impose a border tariff on untaxed carbon emissions embedded in imported products in a revamped NAFTA, the idea has considerable merit—as The Energy Mix founder and curator Mitchell Beer and subscriber Diane Beckett recently pointed out in Policy Options.

For her part, Freeland expressed optimism on the eve of the talks that Canada could sidestep the Trump administration’s specific hostility to climate policy.

“It’s no secret to anyone that Canada has a different view of probably the most important step the world has taken when it comes to the fight against climate change, which is the Paris Accords,” said Freeland. “Having said that, we continue to work at all levels of government with the U.S. on the environment, not least because we have many shared environments that we have shared stewardship of.”

As the Globe and Mail reports, Freeland’s other priorities include preserving terms that allow NAFTA governments to challenge each other’s trade actions if they infringe on commitments under the agreement, and protecting Canada’s unique dairy and poultry marketing boards, which stabilize farm incomes at the cost of slightly higher consumer prices.