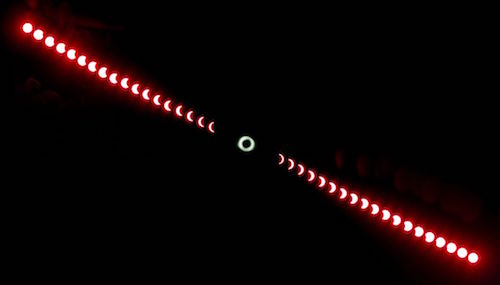 With the United States facing a total solar eclipse August 21, its first since 1979, utility planners and the U.S. Energy Information Administration are looking ahead to an event that will affect about 1,900 utility-scale solar plants, with combined peak capacity of more than 20,000 megawatts.

The eclipse “will cast a pathway of shadow across the United States, with the moon shading at least half of the sunlight reaching Earth across all 48 continental states,” Greentech Media explains. A 256-kilometre-wide band of “totality,” or complete obscuration, will run from Oregon to South Carolina.

Global weather risk consultancy MDA Weather Services expects total U.S. solar generation to be reduced by more than half, with more than 11,000 MW thrown off the grid for 20 minutes, JWN Energy reports. “The peak impact is 20 minutes but the wider impact actually runs several hours,” said MDA Senior Scientist Stephen Jascourt. While the cumulative impact of the eclipse will be less than a cloudy day from sunrise to sunset, he explained, the challenge is that all regions will go dark at once.

“Because it’s so concentrated everywhere at the same time, there’s not an ability to compensate from one region to another region by moving power around the transmission grid,” he explained.

While only a few of the affected solar facilities are right in the path of the totality, “nearly all will lose at least some of their sunlight for several hours through the course of the day,” Greentech notes. “As for the path of totality, it will cross only 17 utility-scale power plants, most of them in eastern Oregon,” but hundreds of others totaling more than 10 gigawatts will be 70 to 90% obscured. “While the moon will completely block the sun for only about to three minutes,” writes Senior Editor Jeff St. John, “the total time during which the sun will be at least partly obscured will last up to three hours.”

As far back as April, the non-profit North American Electric Reliability Corporation (NERC) published an analysis that projected no threat to grid reliability during the unusual event. “Given that the timing and path of the eclipse are well understood and well reflected in solar generation forecasts by CAISO [the California Independent System Operator] and other grid operators, generation dispatch or curtailment would be managed as a part of routine operations,” agreed Steve Krum, spokesperson for solar plant operator First Solar Inc.

California is home to more than 40% of the country’s utility-scale solar, and has seen the technology grow from 0.4% to 10% of its generation capacity over the last five years. But “we have plenty of wind, geothermal, hydro, and natural gas to make sure the grid runs smoothly” during the eclipse, said Public Utilities Commission President Michael Picker. “We also have a lot of Californians who want to do their California thing and step in to help replace the sun when it takes a break.”

CAISO plans to ramp up natural gas and hydroelectric generation, and follow Germany’s lead from a past eclipse by enlisting consumers to help manage demand. Adam Todorski, product technology director for Palo Alto-based AutoGrid Systems Inc., said some utilities will use its software “to shut off unnecessary appliances during the height of the eclipse, and bring them on slowly as solar power returns,” Bloomberg reports.

“It’s a lot like a planned outage; you know it’s coming,” he said. “You can get hundreds of megawatts by shedding things like water heaters, pool pumps, and heat pumps.”

In North Carolina, Duke Energy expects solar generation to fall from 2,500 to just 200 megawatts at the height of the eclipse.

Greentech and JWN both report that U.S. grid operators are learning from Europe’s “stress test” in 2015, when an eclipse temporarily shut down 39 GW of generating capacity. The European Network Transmission System Operators for Electricity (ENTSO-E) “reported that the grid had passed the test, thanks to ‘meticulous preparation and strong regional and European co-operation,’” Power Engineering International wrote at the time. “The most critical moment, ENTSO-E said, was between 10:45 and 11:15, when the sun reappeared and solar power generation began to climb back to its normal levels.” After the moment passed, Dutch grid operator TenneT tweeted that “everything went well. Preparation paid off.”

While the Bloomberg report touts the role of “fast-start natural gas generators” in picking up the capacity shortfall August 21, FiveThirtyEight casts it as “a showdown that could help us build a stronger renewable grid”. With 3.24% of North Carolina’s electricity coming from solar in 2016, far above the U.S. national average. Duke Energy “has a team of engineers essentially running war games to prepare—modelling the possible outcomes in computer simulations, preparing purchases of fuel for traditional generation, and arranging access to electricity generated elsewhere.”

But the experience “has also highlighted the importance of infrastructure upgrades that require big investments,” FiveThirtyEight notes, including new transmission lines and energy storage. The U.S. grid wasn’t designed with solar in mind, it’s “incredibly fragile”, and the eclipse “is definitely a test of how robust a jury-rigged system can be.” There will likely be much more solar on the U.S. grid by the time the next eclipse takes place in 2024, and John Moura, NERC’s director of reliability assessment and system analysis, said this year’s experience “will help us better understand how the grid will have to change to make that new influx of solar electricity work—both on an everyday basis and during extreme events,” FiveThirtyEight states.

While much of the attention leading up to the eclipse is on solar generation and grid reliability, Fast Company reports that towns in 13 states along the “totality” are preparing for a short boom in tourist volumes and unimaginable traffic jams, with Nebraska planning to ban oversized semi-trucks on the state’s highways from sunset August 18 to sunrise August 22.