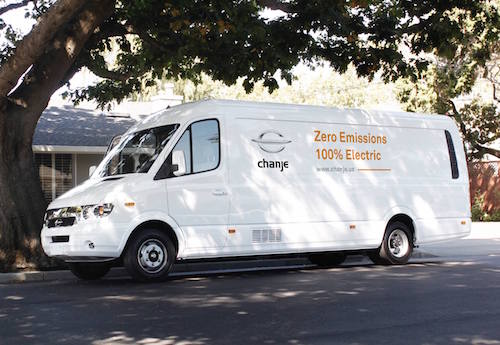 A Los Angeles-based start-up is on the verge of offering an electric truck with a 100-mile range that it hopes will begin decarbonizing urban delivery fleets.

Chanje “emerged from stealth mode on Thursday after having been working on the truck since 2015,” Greentech Media reported last week. “The company is targeting corporations with truck fleets in big cities that want a more environmentally friendly option. The trucks will be competitive with gas-powered delivery trucks—if the cost of fuel and maintenance is factored in, according to executives.”

The company isn’t disclosing pricing just yet. But they’re taking orders for fleet vehicles, and plan to begin deliveries this fall.

“Where we see the problem is in the city, where people live,” CEO Bryan Hansel told Fast Company. “That’s where the pollution is, and so if you put a vehicle in that market where there’s no tailpipe—so there’s zero contribution to noise or air pollution at the point of distribution where people are—we think that’s the unlocking move that’s been overlooked.”

While “consumer-focused electric car companies look to hit a range of 200 miles per charge, Hansel said 100 miles is optimal for delivery trucks,” Greentech notes. “Most delivery trucks don’t drive more than 50 to 75 miles a day, and the vehicles can be charged overnight. Chanje can also add extra batteries for future models if customers want a longer range.”

While Chanje launched in May 2015, Greentech and Fast Company both note that the trucks were developed through a five-year partnership with Hong Kong-based FDG Electric Vehicles Ltd., which owns 50% of the company. The joint venture was originally with the now-defunct Smith Electric Vehicles, of which Hansel was also CEO.

“The first trucks are being manufactured in China, and the company plans to quickly open an assembly plant in the U.S. to reduce freight cost and import duties and create local jobs,” Fast Company notes. “When it sells or leases the product to large companies with depots that have hundreds of vehicles, it will also offer an onsite renewable energy system for charging the vehicles.”