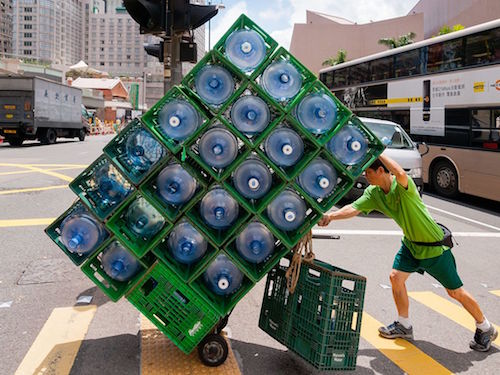 Urging people to change their lifestyles to fight climate change is about as effective as flapping towels at a burning house or bringing a flyswatter to a gunfight, environment reporter Martin Lukacs suggests in a recent post for The Guardian.

“While we busy ourselves greening our personal lives, fossil fuel corporations are rendering these efforts irrelevant,” Lukacs writes. “The breakdown of carbon emissions since 1988? A hundred companies alone are responsible for an astonishing 71%. You tinker with those pens or that panel; they go on torching the planet.”

The freedom of colossal fossils to pollute “is no accident,” he adds. “It is the result of an ideological war, waged over the last 40 years, against the possibility of collective action. Devastatingly successful, it is not too late to reverse it.”

But at “the very moment when climate change demands an unprecedented collective public response,” the neoliberal ideology brought into vogue by former British prime minister Margaret Thatcher and U.S. president Ronald Reagan gets in the way. “Neoliberalism has not merely ensured this agenda is politically unrealistic: it has also tried to make it culturally unthinkable,” Lukacs warns.” Its celebration of competitive self-interest and hyper-individualism, its stigmatization of compassion and solidarity, has frayed our collective bonds. It has spread, like an insidious anti-social toxin, what Margaret Thatcher preached: ‘there is no such thing as society.’”

While there’s ample room for individual action on climate change, “individual choices will most count when the economic system can provide viable, environmental options for everyone—not just an affluent or intrepid few,” he writes. “If affordable mass transit isn’t available, people will commute with cars. If local organic food is too expensive, they won’t opt out of fossil fuel-intensive supermarket chains. If cheap, mass-produced goods flow endlessly, they will buy and buy and buy. This is the con-job of neoliberalism: to persuade us to address climate change through our pocketbooks, rather than through power and politics.”

Lukacs sees hope in the rise of the climate justice and divestment movements, and in the growing ties between climate organizations and social justice movements like Black Lives Matter. “Society, long said to be departed, is now back with a vengeance,” he writes. “So grow some carrots and jump on a bike: it will make you happier and healthier. But it is time to stop obsessing with how personally green we live—and start collectively taking on corporate power.”