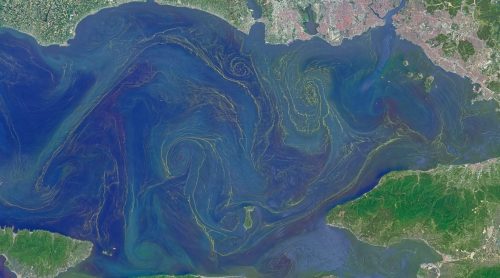 The deep past has cruel lessons for the near future, for example how ocean oxygen depletion can stifle the marine world. It could recur.

LONDON, 11 August, 2017 – It is possible to trigger ocean oxygen depletion, choking the world’s seas. The suffocation zone – the region of the deep sea floor that is now oxygen-depleted – could double in a century, because of human-triggered climate change and other actions.

But don’t panic: the last time the oceans lost oxygen on such a scale was 94 million years ago. Up to half of the oceans became oxygen-depleted and stayed so for around 500,000 years. There were mass extinctions of marine animals.

The story of the sustained death of marine species is recorded in ancient sediments, and the cause of that death is uncertain. But among the suspects are a series of potential causes, all of which are also happening now.

Increased sea temperatures, sea level rise, the trapping of nutrients and discharges of magma from the Earth’s crust have all been blamed. And although the event fits into what forensic geologists would call an unsolved crime, there are parallels with the present.

One of these parallels is that dead zones may be on the increase at the abyssal levels of the ocean. Another is that sea temperatures have been rising. And a third is that the ocean may already have lost 2% of its burden of oxygen.

This loss could go on as the sea waters become increasingly acidic, and as global average temperatures continue to rise as increasing levels of greenhouse gases accumulate in the atmosphere.

So oceanographers report in the journal Science Advances that they set about using sophisticated chemistry to make sense of the rate at which such events can happen, and the scale of them, and began with lessons from the Cretaceous ocean, when dinosaurs still stalked the land.

“This new tool will help us understand the rate at which deoxygenation was happening in the past, and eventually estimate how far present-day losses might extend into the future”

They measured isotopes of the element thallium in black shales rich in organic materials laid down in the oceans 94 million years ago, and drilled from rocks beneath the sea floor off the coast of Suriname, in South America.

As oxygen diminishes, heavier isotopes of thallium accumulate in marine muds. From the evidence of rock cores, the scientists concluded that very large quantities of carbon had entered the oceans, to contribute rapidly to an oxygen crisis.

“To date, there haven’t been quantitative tools available to scientists that are capable of accurately measuring the rate at which oxygen depletion happens,” said Sune Nielsen, of the Woods Hole Oceanographic Institution in Massachusetts, and one of the authors.

“Can the ocean lose half its oxygen in a thousand years? This new tool will help us understand the rate at which deoxygenation was happening in the past, and eventually estimate how far present-day losses might extend into the future.”

It is a given of geology that the present is the key to the past: the rocks exposed on the surface bear witness to what happened millions of years ago.

So it follows that the past can also deliver lessons for the present, and the researchers think that the story told in the ancient shales of what researchers have labelled the Second Oceanic Anoxic Event offers a parallel with present shifts in the modern oceans.

“Our results show that marine deoxygenation rates prior to the ancient event were likely occurring over tens of thousands of years, and surprisingly similar to the two percent oxygen depletion trend we’re seeing induced by anthropogenic activity over the last fifty years,” Dr Nielsen said.

“We don’t know if the ocean is headed toward another global anoxic event, but the trend is, of course, worrying.” – Climate News Network