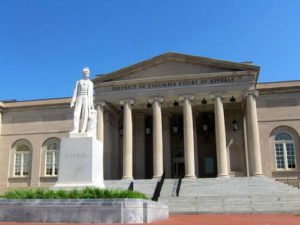 The U.S. Court of Appeals for the District of Columbia has struck down an Obama-era ban on hydrofluorocarbons (HFCs), a class of refrigerants that carry 14,800 times the global warming impact of carbon dioxide over the 15 years when they are active in the atmosphere.

In a 2-1 ruling, the court said the Environmental Protection Agency (EPA) improperly sought to impose the HFC ban using a section of the Clean Air Act meant to prevent ozone depletion.

The U.S. action supported the October, 2016 Kigali amendment to the 1987 Montreal Protocol on chlorofluorocarbons, an initiative by nearly 200 countries that would take the equivalent of 80 gigatons of carbon dioxide out of the atmosphere over the next 35 years.

The EPA had based the rule on a Clean Air Act provision that allows it to require companies to continually replace harmful substances, but “EPA’s current reading stretches the word ‘replace’ beyond its ordinary meaning,” wrote Judge Brett Kavanaugh, in a ruling backed by Judge Janice Rogers Brown, both originally appointed to the court by President George W. Bush.

“Climate change is not a blank check for the President,” Kavanaugh wrote. “However much we might sympathize or agree with EPA’s policy objectives, EPA may act only within the boundaries of its statutory authority.”

The appeal, launched by chemical companies Arkema SA of France and Mexichem SAB de CV of Mexico, had drawn opposition from U.S.-based Honeywell International and The Chemours Co.—with the result that the Trump administration attempted to defend the rule, Bloomberg reports.

The U.S. administration that has rarely met an environmental regulation it could love backed this one “because it benefits U.S. companies,” said Bloomberg Intelligence chemicals analyst Christopher Perrella. “It’s good for the companies and it’s good for the planet. That’s a win-win regardless of your thoughts on climate change.”

“Chemours told investors Monday that the markets for its replacement chemicals in Europe and the U.S. will be a key driver of its growth in the coming years,” Bloomberg notes. Honeywell urged the EPA to continue pursuing the HFC phaseout, arguing that the court ruling “will adversely impact American innovation, manufacturing, and competitiveness in commercializing next-generation technologies.”

The three-judge appeals court panel suggested the EPA might be on firmer footing if it tried to regulate HFCs under the Toxic Substances Control Act. Natural Resources Defense Council attorney David Doniger agreed that “there may be other routes” to a ban, although “we thought that the direct path was perfectly within EPA’s authority.”

Politico’s Morning Energy newsletter said the way forward for U.S. participation in Kigali will be “long and uncertain” in the wake of the ruling. “Even though the [EPA rule] is backed by business interests, getting Pruitt to write a new climate regulation would be no small feat.” And after that, “proponents must still convince a skeptical Trump administration, which has been dismissive of both multi-party treaties and climate science, on bringing the treaty to Congress.”