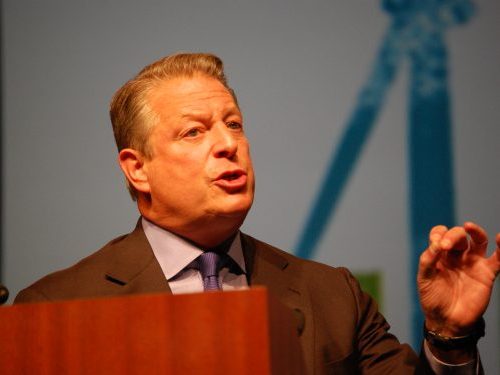 With climate veteran Al Gore’s new film, An Inconvenient Sequel, in theatres this month, the mixed, sometimes brutal reaction to the film is emblematic of a still-polarized public debate over climate change, and the relentless battering Gore himself has taken since the release of his Academy Award-winning An Inconvenient Truth in 2006.

While Sequel has largely received a warm welcome within the climate and energy community, critical coverage has touched on old themes and new: that the film puts too much spotlight on Gore, potentially exaggerates his role in brokering a key component of the 2015 Paris agreement, and is destined by its very existence to further divide an already fractured public dialogue. But the reportage also includes snapshots of the film’s potential as a powerful front-line organizing tool.

Writing in New Scientist, Climate Outreach Research Director Adam Corner suggests Gore “should have stayed in the wings for the follow-up” to his original production, rather than producing a film that will mainly preach to the converted.

While the partisan split over climate has persisted over the last 11 years, “public attitudes to the political establishment have changed markedly, with a populist backlash far and wide,” Corner writes. “In this context, is a film fronted by a highly polarizing political figure the right choice for a big-budget climate campaign in 2017? Unless Gore and the film’s producers envisage campaigners dragging their climate-skeptic uncles to the cinema with them, the documentary can only hope to further galvanize the already-concerned.”

A more effective choice, he argues would have been “for Gore to remove himself from the picture, dial down the Republican-baiting, and instead provide a platform for new, less politically divisive voices.”

Climate hawk Eric Holthaus makes a similar argument on Grist, citing early ratings for the second film to argue that Gore “might be an inconvenient vessel for this message”: of the first 1,219 IMDb users to rate Sequel, 38.8% gave it a perfect 10, 43.1% rated it 1 out of 10, and the remaining 18.1% fell somewhere in between.

“The very definition of a polarized population,” tweeted @kevpluck.

But Holthaus also describes the moment when Sequel become the film he wanted to see.

“I turned the corner on An Inconvenient Sequel when Gore steps aside and lets his most important career achievement—the thousands of activists he’s personally trained over the past decade—take the stage,” he writes.

“Since 2006, Gore’s Climate Reality Project has conducted 35 workshops training more than 12,000 activists from ages 7 to 87 representing 137 countries. Gore himself usually presents roughly half the content. These trainees then go on to give the famous slide show at schools and community organizations. They are able to relate personally to their audience—without any of the political baggage that Gore carries everywhere with him.”

[From direct experience, the 2013 training in Chicago was worth every minute. In Canada, Climate Reality reports that 621,251 people have attended a community presentation.]

“Climate deniers, funded by the fossil fuel industry, continue to wage misleading personal attacks on Al Gore as a way of trying to cast doubt on established climate science and distract attention from the most serious global threat we face,” Gore Communications Director Betsy McManus told Atkin. “Vice President Gore leads a carbon-neutral life by purchasing green energy, reducing carbon impacts, and offsetting any emissions that cannot be avoided, all within the constraints of an economy that still relies too heavily on dirty fossil fuels.”

But Atkin takes the issue a step farther, questioning the very notion that climate advocates should be expected to live carbon-neutral lifestyles.

“Ultimately the argument is deceitful faux-populism,” she writes, “and the real hypocrites here are the purveyors of it.” She chronicles a relentless barrage of attacks—on Gore and many other climate and clean energy advocates—underscoring the disconnect in the argument itself.

“An anti-abortion advocate who believes abortion is immoral and should be illegal, but gets one herself, is a hypocrite,” Atkin writes. “But climate change advocates who don’t live a carbon-neutral lifestyle aren’t hypocrites because, for the most part, they’re not asking you to live a carbon-neutral lifestyle. They’re asking governments, utilities, energy companies, and large corporations to increase their use of renewable energy so that you can continue to live your life as you please, without contributing to global warming.”

In an interview with The Guardian, Gore puts the attacks in the context of a wider “assault on reason” that he traces back to “dark money”, billionaire political funders, and a democratic process he says has been “hacked”.

“In order to fix the climate crisis, we need to first fix the government crisis,” he says. “Those with access to large amounts of money and raw power have been able to subvert all reason and fact in collective decision-making,” making it clear that they’re “trying to cripple our ability to respond to this existential threat.”