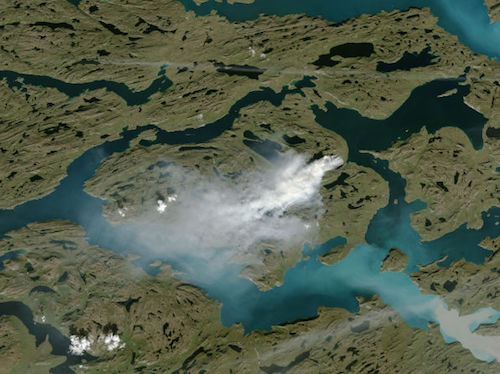 With southern British Columbia smothered in smoky haze from hundreds of fires burning through provincial forests, a pair of mere grass fires may not seem worthy of much attention. But these two are burning in Greenland. They may be the first wildfires to ignite on the island—most of which is covered in ice—in, oh, ever.

The fires in Western Greenland are burning north of the Arctic Circle at 66.9º and 67.8º north, latitudes equivalent to the Canadian Arctic shoreline in the Northwest Territories and Nunavut.

“At this time, this appears to be unprecedented,” Miami University Arctic specialist Jessica McCarty told Wildfire Today. “These appear to be peatland fires, as there are low grass, some shrub, and lots of rocks on the western edge of the Greenland Ice Sheet. They are likely occurring in areas of degraded permafrost.”

Scientists have been alarmed by thawing permafrost all across the Arctic. In addition to fuelling wildfires, thawing has been linked to the release of large volumes of methane, a greenhouse gas more than 28 times more potent than carbon dioxide over a short time span. Fires in high northern latitudes also release black carbon in smoke that can settle on ice downwind, leading it to melt faster. That is a particular risk for the fires now burning in Greenland, close to its dwindling ice sheets.

These may not in fact be the first wildfires on the mostly frozen island, but such fires have until now been exceedingly rare, if they have occurred at all. Stef Lhermitte, a Dutch remote sensing expert, told Climate Central that satellite records have hinted at “fires burning in Greenland over the past 17 years,” but issues with the data left “low confidence that every fire actually occurred.”

Governments Spent $5.3 Trillion in 2015 to Subsidize Fossils, Pay for the Damage