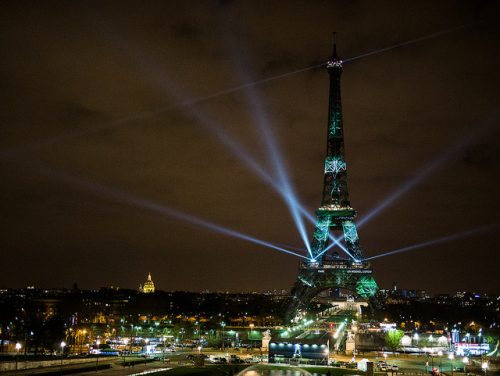 Today’s trends in emissions, population, and economic growth give humanity only a 5% chance of keeping average global warming below 2.0°C by 2100, and a 1% chance of hitting the 1.5°C long-term goal in the Paris agreement, according to a study this week in the journal Nature Climate Change that reinforces the understanding that diplomats brought into Paris negotiations nearly two years ago.

“We’re closer to the margin than we think,” said lead researcher Adrian Raftery of the University of Washington. “If we want to avoid 2.0°C, we have very little time left. The public should be very concerned.”

The report echoes comments by then-United Nations climate secretary Christiana Figueres in the final sprint before the historic global climate conference in Paris in 2015. A UN report had concluded that countries were about to make a “significant dent” in emissions and bring about a “major economic transformation,” including massive shifts to renewable energy and energy efficiency, combined with better land management, urban planning, and transportation. But none of that was expected to deliver a pathway to even 2.0°C, much less 1.5°.

“It is a very good step, it is actually a remarkable step, but it is not enough,” she said at the time, pointing to an International Energy Agency estimate that countries’ renewed climate commitments would hold average global warming at 2.7ºC, against a previous trajectory of 4.0º to 5.0º.

The sobering update in Nature Climate Change brings renewed attention to the Paris agreement’s ultimate role as a stepping stone to more ambitious climate action, not a silver bullet in its own right. “Governments settled on the 2.0°C threshold partly through political expediency, but also because scientists have warned of severe consequences from sea level rise, drought, heat waves, and social unrest should the temperature rise beyond this,” The Guardian reports. Now, “according to the University of Washington study, there is a 90% likelihood that temperatures will rise between 2.0°C and 4.9°C by 2100.”

In a departure from studies based on the impact of greenhouse gas emissions on temperature, the UWashington study looked at 50-year trends in population growth, per capita gross domestic product, and carbon intensity, a measure of emissions per dollar of economic activity. It identified carbon intensity as a key factor shaping future trends.

“Technological advances are expected to cut global carbon intensity by 90% over the course of the century, with sharp declines in China and India—two newly voracious consumers of energy,” reporter Oliver Milman notes. “However, this decline still will not be steep enough to avoid breaching the 2.0°C limit.”

The study found a relatively weak link between population growth and future emissions, since much of the net new population will be located in sub-Saharan Africa, a region with low per capita carbon output.

Raftery stressed that climate action is an absolute must, whether or not the 2.0°C target is ultimately achievable, since climate impacts get worse as emissions rise.

“We would warn against any tendency to use our results to say that we won’t avoid 2.0°C, and so it’s too late to do anything,” he told The Guardian. “On the contrary, avoiding the higher temperature increases that our model envisages is even more important, and also requires urgent action.”

Even if there’s no clear path to 2.0° or 1.5°C today, there may well be before long. “Tomorrow someone could invent a carbon-free energy source that everyone adopts,” he said. “If you look at technology adoption and action taken on the ozone layer and acid rain, it’s clear these things can change faster than people predict.”