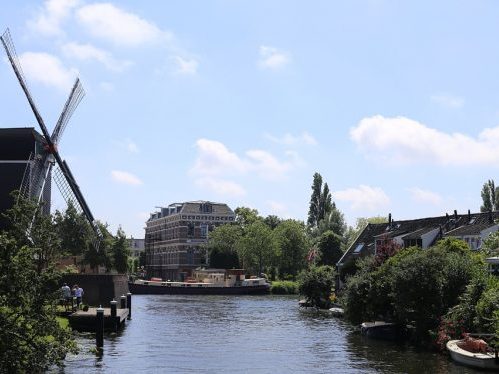 From a massive, 70-foot emergency sea wall, to a requirement that grade 5 students pass swimming tests wearing their clothes and shoes, The Netherlands has woven climate change adaptation into every aspect of its society and social planning.

And now, the New York Times reports, the low-lying country that has steadily improved its adaptation planning after sustaining two devastating floods in 1916 and 1953 routinely offers its expertise in emergency preparedness to visitors from as far away as Bangladesh, Indonesia, Vietnam, and the United States.

“From a Dutch mindset, climate change is not a hypothetical or a drag on the economy, but an opportunity,” the New York Times reports. “While the Trump administration withdraws from the Paris accord, the Dutch are pioneering a singular way forward.”

The country’s design and preparedness philosophy is “to let water in, where possible, not hope to subdue Mother Nature: to live with the water, rather than struggle to defeat it,” the paper adds. “The Dutch devise lakes, garages, parks, and plazas that are a boon to daily life but also double as enormous reservoirs for when the seas and rivers spill over.”

The underlying principle is that “environmental and social resilience should go hand in hand, officials here believe, improving neighborhoods, spreading equity, and taming water during catastrophes. Climate adaptation, if addressed head-on and properly, ought to yield a stronger, richer state.”

“You can say we are marketing our expertise, but thousands of people die every year because of rising water, and the world is failing collectively to deal with the crisis, losing money and lives,” said Henk Ovink, the country’s special envoy for international water affairs. He added that Dutch advice on emergency shelters and evacuation routes enabled Bangladeshi authorities to keep the death toll from a recent series of floods to “hundreds instead of thousands”.

The Times tracks the development of Room for the River, a longstanding national program that “overturned centuries-old strategies of seizing territory from rivers and canals to build dams and dikes.” The Netherlands realized that “we can’t just keep building higher levees, because we will end up living behind 10-metre walls,” said senior government advisor Harold van Waveren. “We need to give the rivers more places to flow. Protection against climate change is only as strong as the weakest link in the chain, and the chain in our case includes not just the big gates and dams at the sea but a whole philosophy of spatial planning, crisis management, children’s education, online apps, and public spaces.”

Much of the Times article focuses in Rotterdam, a city that “has reinvented itself as a capital of enterprise and environmental ingenuity” while building beautiful, functional public spaces that become overflow areas when storm surges hit. “The challenge of climate adaptation is to include safety, sewers, housing, roads, emergency services,” said Chief Resilience Officer Arnoud Molenaar. “You need public awareness,” beginning with reminders to citizens to uproot the concrete paving in their gardens to free up the absorptive capacity of the soil.

“You also need cyber-resilience, because the next challenge in climate safety is cybersafety,” he added. “You can’t have vulnerable systems that control your sea gates and bridges and sewers. And you need good policies, big and small.”

Rotterdam is the home of the Maeslantkering, the 70-foot, computer-controlled sea gate the size of two Eiffel Towers toppled on their sides, that was first built 20 years ago to protect the busiest port in Europe.

While much of the city is below sea level, local business operator Peter van Wingerden said he found that less disconcerting than it would be to live on California’s San Andreas Fault. “At least when we flood,” he told the Times, “we’ll have some warning before our feet get wet.”

What’s incomprehensible, he said, is to see cities like New York rebuilt after Hurricane Sandy without enough attention to the next disaster. “People in the Netherlands believe the places with the most people and the most to lose economically should get the most protection,” the Times notes. So “the idea that a global economic hub like Lower Manhattan flooded during Hurricane Sandy, costing the public billions of dollars, yet still has so few protections, leaves climate experts here dumbfounded.”