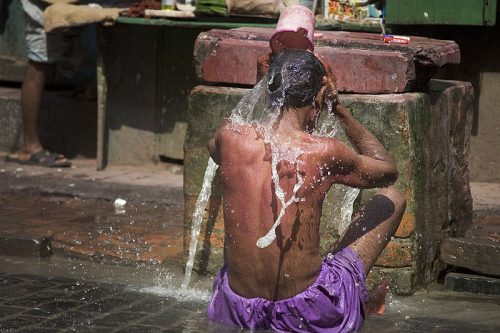 India’s farm sector is vulnerable enough to sudden temperature increases that climate change may have contributed to suicides by nearly 60,000 farmers over the last 30 years, according to a study this week in the Proceedings of the National Academy of Sciences.

A research team from the University of California Berkeley found that a 1.0°C temperature increase on one day during the growing season would be enough to trigger 67 suicides; a 5.0°C rise would translate into 335 suicides.

“Temperature increases outside the growing season showed no significant impact on suicide rates, suggesting stress on the agriculture industry was the source of the increase,” The Guardian reports. “Also supporting the theory was that rainfall increases of as little as one centimetre each year were associated with an average 7% drop in the suicide rate. So beneficial was the strong rainfall that suicide rates were lower for the two years that followed.”

“Without interventions that help families adapt to a warmer climate, it’s likely we will see a rising number of lives lost to suicide as climate change worsens in India,” said UC Berkeley researcher Tamma Carleton.

“The tragedy is unfolding today,” she added. “This is not a problem for future generations. This is our problem, right now.”

According to protesters from the state of Tamil Nadu, now going through its worst drought in 140 years, the pressure of bank loans is an even more serious source of stress than failing crops. One farmer who owed 80,000 rupees (C$16,000) died on the spot outside his bank branch in the city of Trichy, after drinking what The Guardian describes as a “toxic concoction”. The next week, his widow and daughter-in-law showed up to protest outside the bank, carrying wads of rupees.

“We told them, ‘we have repaid your money, now will you give us back my husband’s life?’” Rani Radhakrishnan said.