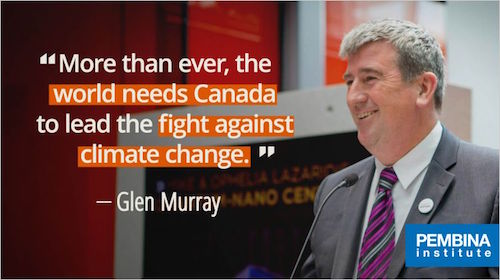 In what political observers called a “surprise” announcement, Glen Murray, architect of Ontario’s bold but controversial C$8.3-billion green energy plan, resigned his portfolio as Minister of Environment and Climate Change, and will become executive director of the Pembina Institute September 5.

Murray will leave cabinet immediately, to be replaced by Newmarket-Aurora MPP Chris Ballard, and resign his Toronto Centre seat effective September 1. He takes up his new position with the Alberta-based environmental think tank four days later.

Wynne praised Murray in a statement, calling her former minister “unrelenting in his advocacy for the issues he cares deeply about, dedicated to the people he represents in Toronto Centre and across the province. There is no doubt that Glen’s voice, candour, and passion at the cabinet table will be missed.”

“As a seasoned activist and veteran of provincial and municipal governments,” the Alberta think tank wrote in its statement announcing his new appointment, “Murray is ideally suited to lead the Pembina Institute into its next chapter.”

Commenting on his move, Murray said he has “always viewed my career as split up into distinct chapters in response to serious challenges. When confronted with a choice between the ‘unthinkable’ and the ‘impossible,’ I will always take on the impossible to stop the unthinkable. More than ever, the world needs Canada to lead the fight against climate change. The Pembina Institute is essential to finding the way forward. I’m excited to join the Institute at this critical juncture.”

High electricity prices have dogged Wynne’s popularity, and earlier this year her government backed away from one element of its green ambitions, cancelling a planned $3.8-billion investment in solar and wind generation to save consumers an average of $2.45 a month on their power bill

Wynne said Murray’s seat will remain vacant until a provincial election scheduled for next June, to avoid the estimated $500,000 cost of holding a byelection to fill it.