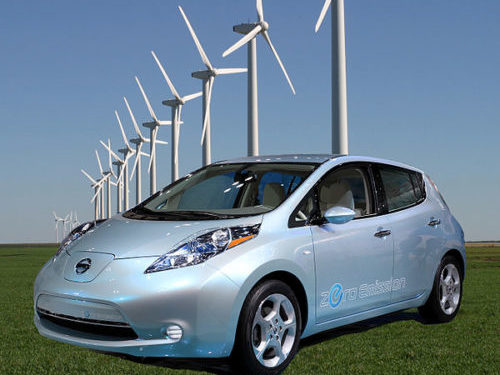 There’s “a growing sense across energy markets, and among market players” that a shift from fossil to fossil-free energy “is gaining pace,” the Cleveland-based Institute for Energy Economics and Financial Analysis asserts in a blog post. Several other outlets have been out with similar analysis over the past week.

One prominent bellwether, the IEEFA notes: a prediction last week by Ben van Beurden, CEO of the world’s second-largest investor-owned oil company, Royal Dutch Shell, that global oil demand is likely to peak by late in the next decade, “contrary to the comparatively stodgy and widely-quoted modeling put out by the likes of BP and the International Energy Agency.”

Van Beurden told his audience that his own next car will be electric. Meanwhile, his company plans to refocus its business on selling “electricity generation fuel ‘such as natural gas and even renewables,’” IEEFA reports.

Meanwhile, American Electric Power, a Midwestern U.S. utility owner, announced it will invest US$4.5 billion to build and own the country’s largest wind farm in red-state Oklahoma, with a capacity of 2,000 megawatts and an associated 565-kilometre high-voltage transmission line to deliver those electrons to market. Bloomberg called the project “a new model for growth-starved utilities looking to profit from America’s solar and wind power boom,” noting that it departs from past utility practice of limiting risk by contracting with independent power producers rather than directly owning renewable energy assets.

Even neighbouring Kansas’ otherwise deeply conservative former Governor Sam Brownback (recently recruited into the Trump administration) “applauded his state on having recently become the fifth in the nation to pass the 5,000-megawatt mark in wind energy capacity,” IEEFA notes.

Responding to Britain’s announcement of a long-range goal to ban the sale of fossil-fueled vehicles after 2040, Bloomberg again opined that “the market will kill oil before the government does,” forecasting that by that date more than 80% of vehicles sold in the UK market will be electric even without a government sunset law. A BMW spokesperson agreed that “we see electrification as absolutely central to our future strategy.” Separately, the same news agency reported that Audi planned to trim other costs by US$12 billion in order to fund development of at least five new all-electric car models by 2022.

“Given the rate of improvement in battery and electric vehicle technology over the last 10 years,” said Alastair Lewis of the British National Centre for Atmospheric Science, “by 2040 small-combustion engines in private cars could well have disappeared without any government intervention.”

The following day, the Canadian Press issued a nearly identical prediction for Canada, citing industry sources to argue that “Canadian cars [are] turning electric without government forcing the issue.”