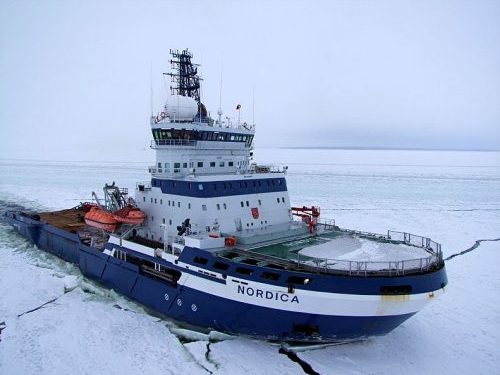 Regarded until the mid-20th century as a nearly impassable sea route due to its persistent ice, the Northwest Passage has steadily yielded to climate change, and on the weekend a Finnish icebreaker set a new record for the earliest transit across the top of Canada from the Pacific to the Atlantic.

The MSV Nordica, with its passengers of researchers and journalists, arrived in Nuuk, Greenland on July 29, the Canadian Press reports, a day earlier than the previous record on July 30, 2008.

The transit also set a 24-day speed record, vastly faster than early efforts to chart a course through the Arctic archipelago and Beaufort Sea. It took Norwegian Roald Amundsen three years to make the first recorded passage in his small vessel, the Goa, traveling east to west between 1903 and 1906. Nearly half a century later, the RCMP sent the St. Roch through the passage in the opposite direction; it set out from Vancouver in June 1940 and arrived in Halifax 28 months later, in October 1942. Two years later, the St. Roch made the first transit through the Passage during a single season on its return to Vancouver, where it is now on permanent display.

The change in conditions is one of the most dramatic effects of global warming. As CP observes, “the once-forbidding route through the Arctic, linking the Pacific and the Atlantic oceans, has been opening up sooner and for a longer period each summer due to climate change. Sea ice that foiled famous explorers and blocked the passage to all but the hardiest ships has slowly been melting away.”

The new accessibility of the Passage has raised both industrial avarice and fears that additional marine traffic will increase pollution and further degrade habitats already under stress from changing climate norms.

According to Department of Fisheries and Oceans records, “the previous earliest passage of the season happened in 2008, when the Canadian Coast Guard ship Louis L. St-Laurent left St. John’s in Newfoundland on July 5 and arrived in the Beaufort Sea off Point Barrow on July 30.”