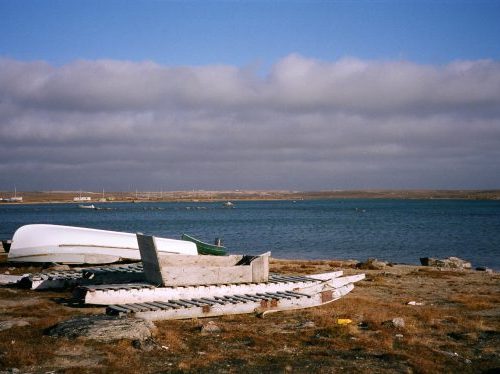 In two unanimous rulings yesterday, the Supreme Court of Canada pointed to serious flaws in the National Energy Board’s consultations with Clyde River Inuit over seismic testing in their territory, but determined the Chippewas of the Thames First Nation had adequate opportunity to comment on Enbridge’s proposed Line 9 pipeline reversal in Ontario.

The court “ruled the NEB’s consultation process in Clyde River was ‘significantly flawed’ and gave little, if any, consideration to the treaty rights of Inuit and their reliance on marine mammals for subsistence,” CBC News reports. The Board held only one meeting in the community, did not explain the significance of the “consultation” process, and eventually delivered answers to the mostly Inuktitut-speaking community’s questions by e-transmitting a 3,926-page document, written in English.

“To put it mildly, furnishing answers to questions that went to the heart of the treaty rights at stake in the form of a practically inaccessible document dump months after the questions were initially asked in person is not true consultation,” the court said, in a ruling written by justices Andromache Karakatsanis and Russell Brown.

In the Line 9 case, the court determined that “consultations are a two-way street,” CBC notes, “and Indigenous peoples alone should not be given the final say on whether a project should proceed. Aboriginal rights must be balanced against ‘competing societal interests.’”

Even as it sided with Enbridge in the specific case, the court delivered what CBC called “a shot across the bow”, warning that “any decision affecting Aboriginal or treaty rights made on the basis of inadequate consultation will not be in compliance with the duty to consult.”

The court “said the NEB is fully equipped to conduct consultations, and should hold oral hearings and use its broad powers to elicit critical information from proponents such as scientific evidence,” CBC notes. “The NEB should also make money available for Indigenous groups to participate in the process, conduct environmental assessments, and make those findings public.”

Reactions from the two communities were as diametrically opposed as the front-line impacts in the two cases.

“What a victory for us,” said former Clyde River mayor Jerry Natanine, a leading force behind the seismic testing challenge. “We’re not totally against development, but it has to be done right. You know, whales don’t have to die, seals don’t have to die off, plankton. There’s a better way to do these things, that’s what we’ve got to find out.”

But Indigenous rights lawyer Nader Hasan, who represented the small Nunavut community, warned that “the NEB process is broken, the NEB never met a pipeline project or an oil project it didn’t like, and that’s reflected in decades of jurisprudence. Clyde River was successful, but what about the next Clyde River? That community might not have the ability to take their case to the courts.”

Describing the Clyde River ruling as a “wake-up call” for Prime Minister Justin Trudeau and his cabinet, Hasan called on the federal government fully implement the United Nations Declaration on the Rights of Indigenous Peoples, which requires free, prior and informed consent on projects affecting Indigenous territory.

The Chippewas of the Thames vowed to continue their fight against Line 9, with Chief Myeengun Henry issuing a direct appeal to Enbridge. “I’m going to ask that you, within 30 days, cease operations of tar sands oil through our traditional territory,” he said. “We ask very calmly, we ask non-violently that you consider that, please.”

“I don’t think it was what anyone was expecting, but I definitely think it’s motivation to keep fighting and keep teaching our children to learn our ways and fight in a good way,” said community member Nicole Fourstar.