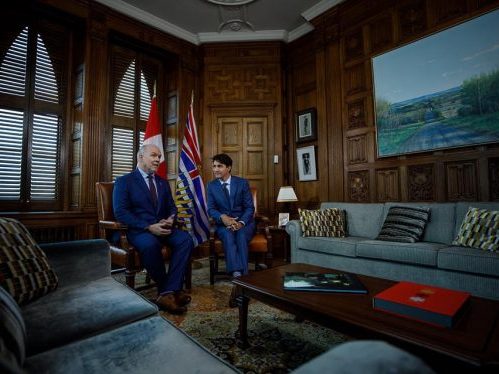 Although Horgan has promised to fight the controversial pipeline “with every tool available,” the two leaders told media their discussion focused mainly on the B.C. wildfires, the province’s opioid crisis, the softwood lumber dispute with the United States, and a super-charged real estate market across much of B.C.

“I’d like to focus on what we have on common,” Horgan said. “It’s ultimately the commonality…that we discussed today. The importance of having someone leading the country as prime minister who has deep roots in British Columbia is a tremendous opportunity for us on the west coast.”

He said it would be premature to discuss his Kinder Morgan strategy while he was still being briefed on his new government’s options.

B.C. Attorney General David Eby said the province would not risk lawsuits by “artificially delaying” permits for the Kinder Morgan project, the Globe and Mail reports. “I’ve been tasked by the premier to identify our options. There is an important piece to that, which is that we must do so within the laws of British Columbia and Canada, because if we don’t, we’ll be sued,” he told a Kamloops radio station. “We’ll end up paying hundreds of millions of dollars that should be going to schools and hospitals to an oil company, and that is not a goal that anybody’s looking for.”

In Ottawa, Trudeau and Horgan both smiled when the PM was asked whether he would stand by federal approval of Kinder Morgan over the province’s objections. “Difficult issues come up. We’re going to work together to resolve them,” Trudeau said. “We know that decisions we take are based on facts and evidence, and we’re going to continue to stand by the decisions that we took in a respectful way, but we know that we are focusing on growing the economy and protecting the environment at the same time, which is what Canadians right across the country expect from this government.”

Earlier in the week, Horgan’s office released the mandate letters he had sent to each member of his new cabinet. The letter to Environment and Climate Change Strategy Minister George Heyman instructs him to “employ every tool available to defend B.C.’s interests in the face of the expansion of the Kinder Morgan pipeline, and the threat of a seven-fold increase in tanker traffic on our coast.”