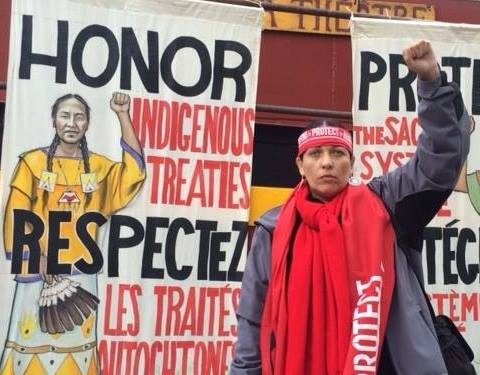 A U.S. climate and energy organizer has opened a crowdfunding campaign to help cover legal costs for well-known anti-pipeline campaigner Cherri Foytlin, “facing a new level of deeply personal, politically-motivated intimidation” after a report last week to the Louisiana Department of Children and Family Services.

“Cherri is a key leader in the movement to stop the Bayou Bridge Pipeline and Energy Transfer Partners,” the company behind the Dakota Access Pipeline, writes Earthworks organizer Ethan Buckner. “She has built a reputation as a fierce champion of Indigenous rights and climate justice. That work has not been without personal sacrifice, and the Foytlin family has been harassed, intimidated, and surveilled in attempts to silence them.”

None of which has stopped Foytlin’s 14-year-old daughter, Jayden, from joining Juliana v. United States, the landmark youth lawsuit on climate justice organized by Our Children’s Trust.

The crowdfunding campaign on Indiegogo’s Generosity platform raised US$3,150—105% of its original goal—in one day. But the site is still live.

“For those of us who know Cherri Foytlin, we know that she is a beacon of resilience and love for her family, community, and our world,” Buckner writes. “We know that she has built a supportive, loving home for her six incredible kids. And we know that despite facing tremendous obstacles, from horrendous flooding to police violence, the Foytlin fam continues to thrive.”