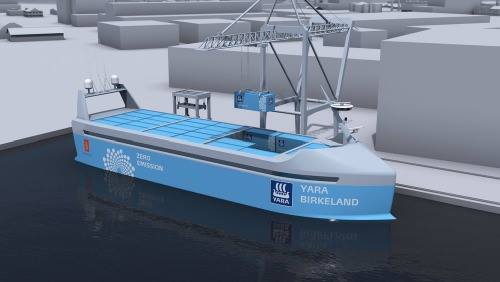 An autonomous, zero-emission “ghost ship”, already dubbed the “Tesla of the seas”, is set to begin plying a 37-mile supply route in Europe next year with GPS, radar, sensors, but no human crew.

The all-electric vessel, a joint venture by agriculture company Yara International and technology business Kongsberg Gruppe now under construction in Norway, “will become autonomous in stages, so it will actually operate with a small crew to begin with,” Alphr reports. “However, according to a post on the company’s website, the Yara Birkeland will ‘be capable of performing fully autonomous operations from 2020.’”

Initially, the ship will carry fertilizer from a production plant to a nearby port. Eventually—provided that maritime law can be modified to permit it—Yara Head of Production Petter Ostbo sees autonomous ships crossing the high seas between The Netherlands and Brazil.

“The vessel will cost US$25 million, about three times as much as a conventional container ship of its size, but its backers say without need for fuel or crew it promises to cut annual operating costs by up to 90%,” the Wall Street Journal reports. “The 100-container ship is scheduled to be in the water toward the end of next year.”

“It’s not a matter of technology, which is already there, but a business case,” said SeaIntelligence Consulting CEO Lars Jensen. “Autonomous ships are expensive to begin with, and have to be built very robust, because if they break down the cost of getting a team to fix them in the middle of the ocean will be very high.”