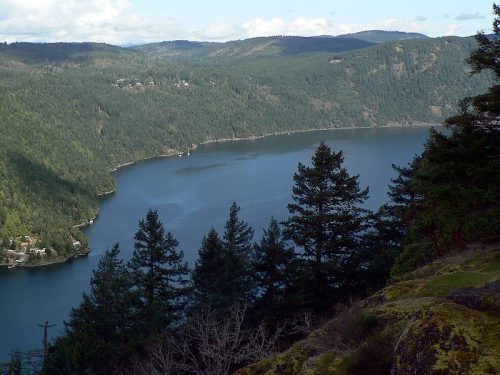 In a distinctly Canadian David vs. Goliath confrontation, the 1,900 people of the very green District of Highlands, a small municipality tucked into a nook of southern Vancouver Island near Victoria, have sent a stiff letter asking 20 of the world’s biggest, most powerful oil companies to acknowledge their climate impacts.

The community is the first to take up a challenge that West Coast Environmental Law and other groups set for 55 B.C. municipalities earlier this year. The groups challenged them to write “climate accountability letters,” notifying fossils of their pending liability for damage and losses from climate change.

The District of Highlands letter, sent July 13 to a list of companies including Chevron, ExxonMobil, and Shell, “demands that these companies pay a fair share of the climate costs suffered by the District, such as costs to prepare for wildfires, drought, and other climate change impacts,” according to a WCEL release. “The District also wrote to other local governments to encourage them to send similar letters.”

The environmental law group adds that “to West Coast’s knowledge, the Highlands letter is the first of its kind sent by a local government anywhere in the world.”

Or at least the most polite so far. Earlier this month, a group of California communities with similar complaints in the more litigious United States went directly for the legal briefs, filing suit for climate-related losses against 37 oil companies and demanding compensation.

If the District of Highlands’ note fails to get the attention it deserves from Shell or Chevron, WCEL says it has invited it and other B.C. municipalities “to consider a joint class action against fossil fuel companies for a portion of their climate costs.”