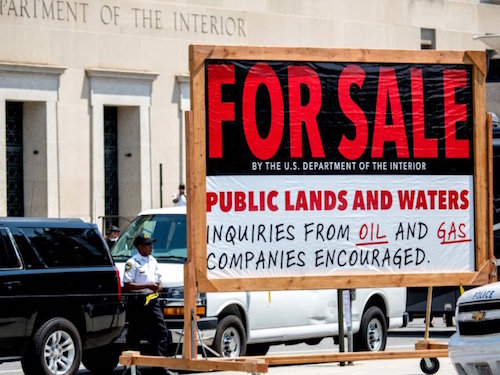 A senior climate scientist and policy expert from the U.S. Department of Interior is going public after being reassigned to an internal job as a glorified accounts receivable clerk.

“Reluctantly blowing the whistle on an administration that chooses silence over science,” tweeted Joel Clement July 19, after his opinion piece appeared in the Washington Post. “The Trump Administration is neglecting the health and the safety of Alaska Natives and their communities,” at a time when “communities of Kivalina, Shishmaref, and Shaktoolik are perilously close to melting into the Arctic Ocean.”

In the Washington Post, Clement explains that his seven-year career at Interior included an assignment to help endangered Alaskan native communities prepare for the impacts of climate change. But last month, “I was one of about 50 department employees who received letters informing us of involuntary reassignments,” he writes. “Citing a need to ‘improve talent development, mission delivery, and collaboration,’ the letter informed me that I was reassigned to an unrelated job in the accounting office that collects royalty checks from fossil fuel companies.”

A day later, Interior Secretary Ryan Zinke told Congress his department “would use reassignments as part of its effort to eliminate employees,” Clement recalls. “The only reasonable inference from that testimony is that he expects people to quit in response to undesirable transfers. Some of my colleagues are being relocated across the country, at taxpayer expense, to serve in equally ill-fitting jobs.”

In the months before his reassignment, Clement spoke out publicly and briefed the White House, senior Interior officials, and international colleagues on a crisis that has also drawn attention and concern from Alaska Gov. Bill Walker (I) and Sen. Lisa Murkowski (R). “It is clear to me that the administration was so uncomfortable with this work, and my disclosures, that I was reassigned with the intent to coerce me into leaving the federal government,” he writes. So he’s filed a whistleblower complaint with the U.S. Office of Special Counsel.

“Removing a civil servant from his area of expertise and putting him in a job where he’s not needed and his experience is not relevant is a colossal waste of taxpayer dollars,” Clement notes. “Much more distressing, though, is what this charade means for American livelihoods.” The Arctic is warming twice as fast as any other part of the planet, and “the land upon which citizens’ homes and schools stand is newly vulnerable to storms, floods and waves,” he writes.

“As permafrost melts and protective sea ice recedes, these Alaska Native villages are one superstorm from being washed away, displacing hundreds of Americans and potentially costing lives. The members of these communities could soon become refugees in their own country.”

Clement’s complaint and articulate op ed make him a leading edge in the response to a massive push in Zinke’s Interior Department to promote fossil development and gut environmental protections on more than 500 million acres of public lands and hundreds of millions of acres offshore.

“In the past few weeks alone, Zinke has lowered the price companies must pay the government for offshore drilling; acted to accelerate approval for onshore drilling permits; approved exploratory drilling in the Arctic’s Beaufort Sea; and scheduled lease sales on [western U.S.] land the Obama administration had deemed off limits,” the Post reports.

“And Zinke’s moves have had an immediate effect. While Trump’s ambitious plans to overhaul the tax code and renegotiate international trade pacts remain far off, and his campaign to roll back environmental regulations will take months to produce results for industry, Zinke is taking concrete action to deliver on one of Trump’s most important campaign promises”—in the words of then-candidate Trump, to “lift the restrictions on the production of $50 trillion worth of job-producing American energy reserves, including shale, oil, natural gas, and clean coal.”

To support Trump’s self-styled quest for “energy dominance”, Interior “has repeatedly upended Obama-era rules that sought to extract higher royalty payments from the energy industry or set new limits on where and how companies can develop publicly owned resources,” the Post notes.

In reaction to the 180° policy turn, Greenpeace planted a For Sale sign outside Interior Department headquarters, emphasizing that “inquiries from oil and gas companies” are encouraged. “The Trump administration and Secretary Zinke want to sell our public lands and waters away to desperate fossil fuel companies,” said climate campaigner Mary Sweeters.

Zinke “is meeting almost exclusively with fossil fuel lobbyists, ignoring the voices of people in this country who want to see our public lands, national monuments, and waters protected, not exploited,” she added. “It’s clear that unless you are an executive at Exxon or the company building the Dakota Access Pipeline, Zinke’s Interior Department will most likely not listen to you.”

Interior also blocked Mark Zuckerberg from meeting with research ecologist Daniel Fagre, the region’s top climate scientist, during the Facebook founder’s recent tour of Glacier National Park. “Sure, the administration has a particular view. Fine,” Union of Concerned Scientists fisheries specialist Andrew Rosenberg told the Post. “But that doesn’t mean you suppress scientific information and evidence and expertise the Park Service has developed over literally decades.”

Meanwhile, InsideClimate News reports that the Arctic National Wildlife Refuge could once again be in the crosshairs for oil and gas development, after a draft House of Representatives budget called for US$5 billion in new lease revenue over the next 10 years. While the budget line doesn’t refer specifically to the ANWR, “I don’t think there’s any confusion among anyone that this is directed at opening the Arctic National Wildlife Refuge to drilling,” U.S. Sierra Club Legislative Director Melinda Pierce told InsideClimate.

“The coastal plain of ANWR, a 1.5-million-acre stretch along the northern coast of the refuge, has long been in dispute,” writes ICN reporter Sabrina Shankman. “For decades, advocates of oil and gas drilling have proposed opening it for development, but each attempt has been fought off. Now, with a Republican Congress and a president who enthusiastically backs Arctic drilling, the effort appears more likely than ever to pass.”