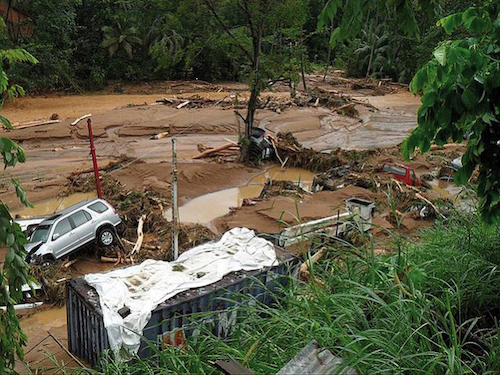 Storytelling and local solutions emerged as key factors spurring action on climate change adaptation during a recent gathering of journalists and government communicators in St. Lucia.

In a part of the world where images of polar bears and ice caps “just don’t resonate locally,” the International Institute for Sustainable Development reports, workshop participants “stressed the need for stories that show local impacts on people’s lives.”

St. Lucia, a small island state in the eastern Caribbean, has seen three major hurricanes in the last decade—Dean in 2007, Tomás in 2010, and the December Trough in 2013. Together, they brought cumulative damage worth more than US$400 million, in a country with US$1.38 billion in GDP last year.

“As climate change will make extreme weather more frequent and intense, journalists said telling individual stories is a powerful way to build awareness about the importance of preparing for extreme weather events,” or to talk about climate impacts on peoples’ everyday lives, IISD notes.

“Examples include how warmer waters cause fishers to go further from shore in pursuit of mahi-mahi seeking colder water, which impacts their bottom line. Other ideas include focusing on how a warmer climate will increase the risks of mosquito-borne diseases, and how that might affect health and the economy.”

And despite the severity of local impacts, “reporting that emphasizes the negative impacts can cause audiences to feel helpless in the face of climate change,” a couple of participants stressed. One reporter recalled a 2016 story on a solar project designed to counter drought on the island; another talked about focusing on solutions “that encourage Saint Lucians to take action on climate change,” write IISD staffers Christian Ledwell and Damon Vis-Dunbar.

In a news culture where “if it bleeds, it leads,” journalists grappled with the reality that stories on robberies or arrests often get better play than crucial government meetings on climate impacts and solutions.

“Climate change policy stories are often couched in technocratic phrases and acronyms that just don’t pack the same punch as a crime story,” IISD notes. “In pitching stories about climate change policy, it’s vital to think of what journalists need: statistics related to peoples’ livelihoods, success stories from sectors that are tackling climate challenges, and sound bites in plain language that relate to individuals’ experiences.” (h/t to GreenPAC Executive Director Sabrina Bowman for pointing us to this story)