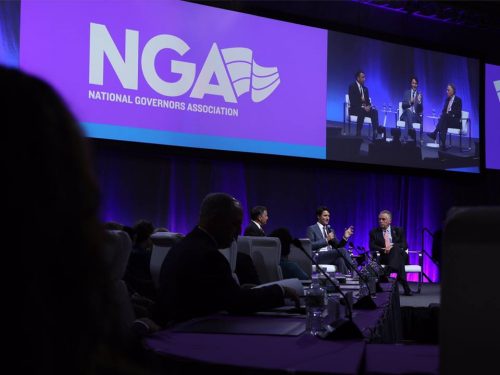 Prime Minister Justin Trudeau’s keynote address Saturday to the U.S. National Governors’ Association may have been part of a wider “doughnut strategy”, aimed at advancing Canadian interests on issues ranging from trade to climate change in the face of an unpredictable if not outright hostile White House.

In his speech in Providence, Rhode Island, a first for a Canadian prime minister, Trudeau called the U.S.-Canada relationship a “model for the world”, asserting that it’s up to both countries to “get it right”. But with the Trump administration reopening the North American Free Trade Agreement (NAFTA) for negotiation and revision, Trudeau warned of a “race to the bottom” that would hurt people on both sides of the border if isolationist attitudes hold sway.

“Sometimes getting it right means refusing to take the politically tempting short cuts,” said Trudeau, who stressed that Canada is by far the biggest customer for U.S. exports. “More trade barriers, more local content provisions, more preferential access for homegrown players and government procurement, for example, does not help working families over the long term or even the mid-term.”

Coverage of Trudeau’s speech had little to say about the divergence between Canadian and U.S. positioning on climate change. But last month, Trudeau declared himself “deeply disappointed that the United States federal government has decided to withdraw from the Paris Agreement”—prompting The Independent to note that the PM “specified the federal government’s actions, not the U.S. as a whole.” Now, news reports point to climate as one of the areas where Ottawa is reaching out to governors and other influencers on both sides of the U.S. partisan divide, seeking common ground on issues the White House may not be in a mood to address.

Rhode Island Gov. Gina Raimondo, who hosted the governors’ meeting, said she was left “feeling like we were like-minded on a lot of things” after a half-hour meeting with Trudeau on Friday, including “the need for innovation in government, to move toward renewable energy and meet the challenges of climate change.”

Iowa Gov. Kim Reynolds noted that Canada receives 27% of her state’s exports, telling a local TV station that she “had the opportunity to discuss the importance of renewable energy with the prime minister. Iowa’s diversified energy portfolio, including biofuels, solar, and wind energy, allows our state to not only feed the world, but to fuel it as well.”

And the Independent recalled Trudeau’s meeting last month with Washington State Gov. Jay Inslee, where the two “spent quite a bit of time discussing clean energy and climate change and how states like Washington are moving forward on aggressive carbon reduction policies,” according to Inslee Communications Director Jamie Smith.

“There are multiple issues where the states will have to pick up the mantle of leadership and collaboration with other nations,” Smith said. “Trade and climate change are two of the big ones.” She added that the state is as “ready as ever to work together on climate, create jobs and grow our economy, and embrace people from around the world who are seeking refuge or opportunity.”

Inslee has also joined his counterparts from California and New York State, Govs. Jerry Brown and Andrew Cuomo, in a promise to honour U.S. commitments under the Paris agreement. “The president has already said climate change is a hoax, which is the exact opposite of virtually all scientific and worldwide opinion,” Brown said in a joint statement with his two colleagues. I don’t believe fighting reality is a good strategy—not for America, not for anybody. If the President is going to be AWOL in this profoundly important human endeavour, then California and other states will step up.

All of which plays well with what the New York Times describes as Canada’s “quietly audacious campaign to cajole, contain, and if necessary coerce the Americans.” The strategy for “managing” Trump “is unlike anything tried by another ally,” writes foreign policy specialist Max Fisher. “And he has largely succeeded where even experienced leaders like Angela Merkel of Germany have fallen short.”

The intent of the strategy, developed in the days following the U.S. election last November, is to “cultivate access, but not just within the White House,” former ambassador Derek Burney told the Times. “To work the American system as never before.”

“By organizing a grassroots network of American officials, lawmakers, and businesses, Canada is hoping to contain Mr. Trump’s protectionist and nationalist impulses,” Fisher adds. “Though emphasizing the benefits of harmony, the Canadians are not above flexing muscle, with a provincial government at one point quietly threatening trade restrictions against New York State.”

The broader lines of that strategy show Canada “courting every other level of government, forming something like a doughnut around a White House-shaped hole,” the Times reports. “Canadian officials have fanned out across the United States, meeting with mayors, governors, members of Congress, and business leaders on matters from trade to the environment.”

In an effort that involves “going into parts of America that few cabinet ministers from Canada have gone to,” in Burney’s words, key cabinet ministers’ calendars “resemble those of rock bands on summer tours,” Fisher writes. “They travel armed with data on the precise dollar amount and number of jobs supported by Canadian firms and trade in that area.”

Fisher identifies Trump’s decision on the Paris deal as one of the turning points in the strategy. “Something snapped in the last few weeks,” said ex-Trudeau foreign policy advisor Roland Paris. Since Trump’s Rose Garden statement, “the approach has been to maintain cordial relations with the White House while going to extraordinary lengths to activate American decision-makers at all levels of the political system.”