‘Frugal Innovation’, Not Dirty Energy, Makes the Case for Climate Action in India 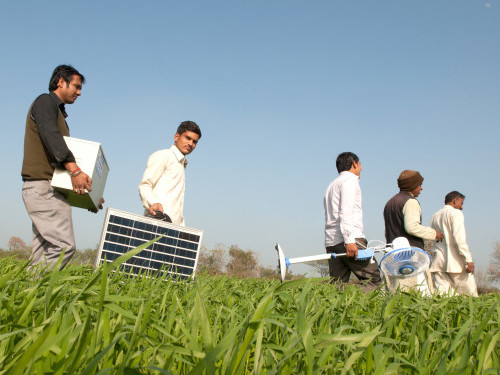 These terms are familiar to climate change communicators in the developed world. But does the same language connect with ordinary people in developing countries?

A study from India argues it doesn’t. The Global Narratives Project, run by Climate Outreach, a Europe-based specialist in climate change communications, and Climate Action Network International (CAN-I), a worldwide network of over 1,200 NGOs, concluded a project pilot in India. There, they teamed with local partner Climate Action Network South Asia (CANSA). CANSA, in turn, trained its local associates to run 16 narrative workshops with 154 participants, including students and farmers, in English and Hindi.

The overall message: go local. “What we realised is that the messaging we have been using like ‘save the climate’ just doesn’t translate,” says Shailendra Yashwant, communication advisor at CANSA. “Most training materials are either in English, or in very technical Hindi. So most people just haven’t understood conventional messages.”

The term “dirty energy”, for instance, was poorly understood. “Nobody connected the use of coal to climate change,” says Yashwant. “They saw pollution as being caused by plastics, or cars, but not coal.”

The study also found that the concept of climate change, as understood by the West, is not understood the same way in India. The key, says Yashwant, is pointing to visible changes in the immediate environment. “People seemed to understand climate change much better when we related it to a certain crop that never grows any more, or an animal that has disappeared.”

One participant was 45-year-old Anita Bahuguna, a farmer in Chamba, a small hill town in northern India. Bahuguna, who says she has been farming “since I was a child”, describes how she experiences environmental change. “The rains do not come at the usual times, the crops do not grow as usual. As more and more roads and hotels are built, our hillsides have become shorn of trees”.

What was different about this workshop, says Bahuguna, is that it spoke to the farmers’ way of life. “For instance, we were shown how to plant more trees around our houses to stop hillside erosion,” says Bahuguna. “And we also told not to use smoky stoves inside our houses. None of us knew that the smoke is a major cause of lung diseases, especially in children. Now we are considering smokeless stoves.”

With 154 participants, the study was just a first step towards understanding how Indians engage with the idea of climate change, says Yashwant. Nevertheless, he thinks it holds important lessons.

One key finding was a strong resistance to renewables. “There is little affection for solar, hydro or wind energy on the ground,” says Yashwant. “People think of it as a handy application, like having a solar lamp, but not as something that can replace coal.”

Climate justice was another idea that did not get traction. While the Indian government has consistently argued rich nations must pay for their carbon pollution, participants were keen that India stand on her own feet. Most agreed with the statement: “We cannot wait for help to arrive from the West; India is in the unique position to be the first emerging economy to take action.”

As an example of effective messaging, Yashwant cites the old but still much beloved “Chipko Andolan”, a forest conservation drive in the seventies where rural women protected trees from being cut down by hugging them. (The word “chipko” means “to hug” in Hindi). Over 40 years later, the slogan endures – even as “tree-hugger” is used to mock green activists in the West.

In the future, CANSA plans to equip more local trainers with messages tailored to their audiences. “We need local training and slogans that speak to people,” says Yashwant. “Not messages copied from the West.”