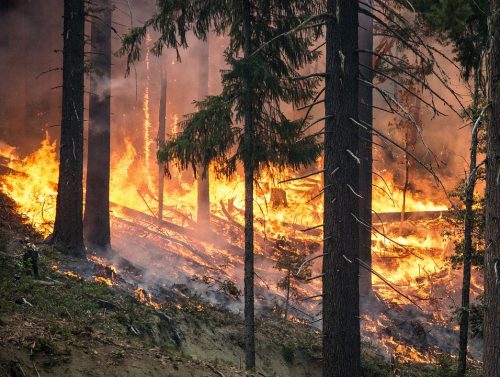 British Columbia declared its first state of emergency in 14 years as the number of people under evacuation from hundreds of wildfires reached 14,000 and provincial officials warned that the experience—along with last summer’s catastrophic fires in Alberta—represent a “new normal” for many Canadian communities.

About a dozen major fires, and as many as 300 smaller ones, burned across 500 kilometres of the province’s interior from Quesnel to Princeton, affecting scores of municipalities, Indigenous communities, and highways. On Monday, CBC News reported, the focus turned to Williams Lake, the Cariboo region’s largest community, where “10,500 people are surrounded by fires on three sides.” The Globe and Mail reported that flames forced the closure of several forest product mills and threatened Kinder Morgan’s Trans Mountain pipeline, carrying 300,000 barrels a day of diluted bitumen and other petroleum products from Alberta to Vancouver.

The Canadian Forces sent helicopters to assist in the effort to contain the blazes, and outgoing B.C. Premier Christy Clark announced of a C$100-million fund, to be administered by the Red Cross, to aid those who’ve been displaced.

But while the state of emergency was unusual, the events that prompted it are becoming anything but.

“What we’re seeing right now” in B.C., and what we saw in Alberta last year, we are conditioned to think of as extreme events,” Sarah Henderson a senior scientist at the B.C. Centre for Disease Control, told Vancouver’s Metro News. “We have to start shifting our thinking [to] perceive them as what could be the new normal.”

That normal includes potential long-term health effects from wildfire smoke, especially for vulnerable groups like pregnant women, infants, the elderly, and people with respiratory impairment, Henderson said. She urged “adaptation for our health authorities and larger populations themselves. It is a scary thought, but if we’re going to be realistic about the decades ahead, we are just going to see more and more fires and we have to ensure our communities are as prepared as possible.”

A new report by Climate Central based on more than 30 climate models predicts that by 2100 summer highs in Vancouver will be 7ºC higher than today’s. The city will record heat waves typical of Chicago in the early 21st century, “escalating wildfire frequencies and heat-related mortalities alike,” Metro notes. By then, Ottawa may feel like steamy Belize.

On the Energy Collective blog, Jim Baird notes the “painful” irony that under Clark, British Columbia has pursued policies likely to invite even worse fire calamities in the future. For the province, “the damage is self-inflicted,” Baird charges, as Clark’s campaign to expand B.C.’s natural gas exports implied increasing its greenhouse gas emissions by as much as 40% from 2014 levels by 2030. Such an increase, he notes, would make the province’s “climate action goals impossible to meet and undermine Canada’s commitments.”